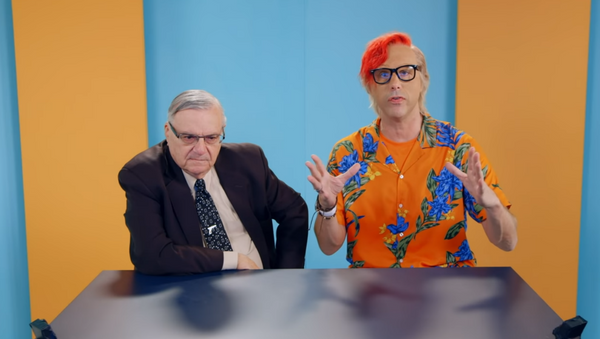 © Screenshot/Sacha Baron Cohen
Subscribe
Sacha Baron Cohen offered some eyebrow-raising material on Sunday during the latest episode of his Showtime series “Who is America?” This time, it came thanks to the chemistry between Cohen’s YouTube character and former Arizona Sheriff Joe Arpaio, who is now running for the US Senate.

In the latest episode of the show, Cohen posed as Finnish YouTuber OMGWhizzBoyOMG, whose so-called real name is Ladislas Kekkonen (neither is an actual person). The skit involved Cohen — as Kekkonen — bringing Arpaio onto the online show to talk about gun rights and his ties to US President Donald Trump.

​"So, I'm going to unbox this shopkins, and while I'm doing that, why not tell me what communists are trying to do to stop people from having guns?" Cohen prompts Arpaio as he begins the unboxing.

"Well, that's a big issue, but I will say over and over again that guns don't kill, people kill," Arpaio says before Cohen interrupts his answer to announce that he's just unboxed the "D'lish Donut" shopkins, one of hundreds of collectable mini-toys popular among children.

"D'lish Donut, you have to understand that you have to follow the Constitution and the law and allow people to have guns," the 86-year-old man tells the tiny toy. "Bad guys are going to get their guns… and [they're] going to kill you. I'm hoping that somebody else in there has a gun and will shoot that person before he shoots you."

Cohen then tells Arpaio that unlike the mini-toy, he's a gun advocate and has been collecting dozens of weapons for the "upcoming race war."

​Cohen then brings up Arpaio's ties with US President Donald Trump and inquires about the rumors raised in the infamous Steele dossier that the president took part in some kinky sex practices.

"Do you think President Trump — he's your friend — do you think he might've had a golden shower?" Cohen asks. Per Arpaio, "It wouldn't surprise me."

The Senate candidate later adds that Trump would like Kekkonen, aka Cohen, if they ever met. "I'll tell you one thing; if he sees this and the way you're speaking, he's going to like you, because he thinks like you think."

​"I may have to say yes," Arpaio tells Cohen.

Weeks before Cohen's Showtime series began airing, Arpaio, like several other prominent political figures, issued a statement noting that he, too, had been duped by the comedian. The former sheriff told The Arizona Republic that he was upset about getting tricked by Cohen and that he felt suspicious of the situation once the interviewer began to "zero in on sex."

"I started to get a little angry, a little sad, but I went through it," Arpaio explained to the publication. "I know Palin said she cut it loose and left… I never leave. You know me, I never left the interview. I went to the bitter end."

Arpaio is best known for being pardoned by Trump in August 2017 after being found guilty of violating a court order that mandated he cease his department's racial profiling practices. He is currently campaigning to represent Arizona in the US Senate.