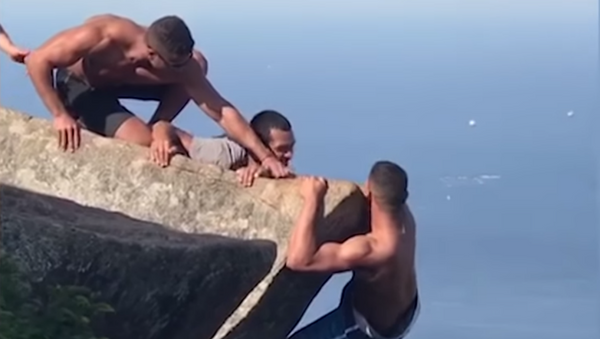 Dramatic footage released Tuesday captures the moment a couple of good Samaritans helped a man dangling from the edge of Brazil's Pedra da Gávea mountain after he was unable to climb to safety on his own.

According to Alencar Amaral, a professional climber who filmed the incident, the situation unfolded when he and some of his buddies were trying to snap some photos.

​"The day was perfect for us, a lot of sunlight where we could clearly see the ‘Bairro de São Conrado' down below us," Amaral told the video site Caters. "The intention was to take a picture with all the optical illusions around, but it was difficult to do due to the risk of being very high from the ground where the photographer takes the pictures."

Pedra da Gávea is a popular site among tourists and Instagram queens and kings wanting to up their game. A search on the social media site turns up more than 150,000 images, many of which show people either standing on or hanging from cliff edges.

So, just as Amaral and his friends were getting into position, a photobomber intervened, swinging himself over the ledge in an attempt to show off his thrillseeking side. Unfortunately, when it came to getting back on top of the rock, he needed a bit of a boost.

​"In the end he was struggling to get back up, but luckily nothing major happened, as my friends jumped in to help him out," Amaral later told Caters, according to news.com.au.

Climbers, beware. Pedra da Gávea can be a cruel mistress.