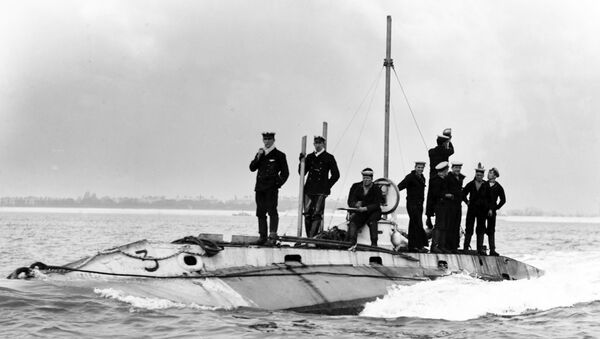 In September 1914 HMS Pathfinder became the first ship to be sunk by a submarine when it was torpedoed by a U-boat off the coast of Scotland. Sputnik has spoken to Iain Ballantyne, author of a new book, The Deadly Trade, about the shocking impact the news had on navies around the world.

The First World War was barely a month old when the German navy showed it meant business and did not intend to let Britain's Royal Navy — the most powerful in the world — succeed with its trade blockade on Germany.

U-21, a German submarine commanded by Kapitänleutnant Otto Hersing, fired a single torpedo at HMS Pathfinder, which blew up and sank off St. Abb's Head, with the loss of 256 lives, including 19-year-old Bill Austin.

"His body was never recovered and he has no grave," his nephew Paul Ratcliff said in an interview in 2014, when a group of divers took a tribute down to the wreck, about 50 miles east of Edinburgh.

But the Kaiser was overjoyed and described the sinking of HMS Pathfinder as "a ray of light." 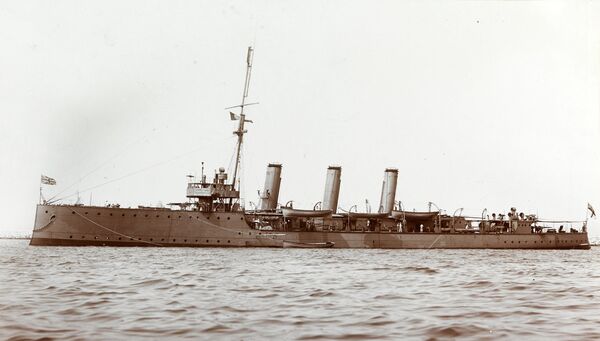 HMS Pathfinder, pictured, was the first warship to be destroyed by a submerged submarine firing a self-propelled torpedo
© Photo : US Naval History and Heritage Command

Iain Ballantyne, author of The Deadly Trade: The Complete History of Submarine Warfare from Archimedes to Present, said the sinking of HMS Pathfinder had a profound impact.

"It was a shock for the world, never mind Britain. For the Royal Navy it confirmed the darkest fears of the battleship admirals that puny, filthy little submarines could cause significant damage. It was the first time a submerged submarine had used a self-propelled torpedo to sink a warship. Death came from a vessel hidden below the waves and until that point in naval history even an elderly cruiser like Pathfinder could only have been sunk by the shells of another surface warship," Mr. Ballantyne told Sputnik.

Horton — who would go on to become an admiral and led the fight against U-boats in the Second World War — began the Royal Navy's tradition of flying a skull and crossbones flag from his sub's conning tower on his return to port to show an enemy ship had been sunk.

Controversially the crew of HMS Conqueror flew the same pirate flag after sinking the General Belgrano during the Falklands war.

What Were The Prize Laws?

The early years of submarine warfare were governed by the Prize Laws, which insisted submarine captains should fire a "shot across the bows" of enemy merchant ships and try to tow them into port or scuttle them but only after putting the crews into lifeboats.

"The Prize Laws were an attempt to impose a set of civilized rules on a revolutionary type of vessel that many feared — if allowed off the leash to exploit its full, stealthy potential — could inflict slaughter and global chaos via the disruption of the global trading system…It was very difficult for a tiny submarine to take aboard passengers or crew from a ship it had just sunk, while the requirement to expose itself on the surface to signal, stop, board and search a merchant vessel robbed it of its stealth and main protection. Nonetheless submarines on all sides did exert themselves to abide by the Prize regulations. Using torpedoes without warning was, at the outset of the war, seen as a monstrous thing to do against merchant shipping," Mr. Ballantyne told Sputnik.

When the ocean liner Lusitania was sunk in May 1915 with the loss of 1,198 lives — including 100 American passengers — there was uproar on both sides of the Atlantic and the arguments of isolationists who sought to keep the United States out of the war were undermined. 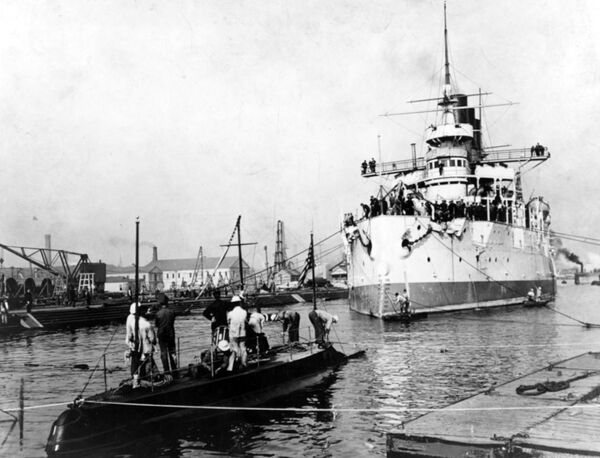 New York 1901: In the background is the Russian pre-dreadnought Retvizan, with the submarine USS Holland in the foreground
© Photo : US Naval History and Heritage Command

But the German high command pointed out Lusitania had been carrying munitions as well as passengers and claimed it was a justified target.

In 1915 German U-boats sank 1,307,996 tons of shipping — 855,721 tons of which was British — and forced Admiral Jellicoe to move the Grand Fleet from Scapa Flow, in the north of Scotland, to Lough Swilly in Northern Ireland.

"Because the Germans could not break the British naval blockade on themselves — they hoped merciless war on Allied merchant shipping would cut off supplies to the enemy armies fighting on land and so bring about a favorable peace deal," Mr. Ballantyne told Sputnik.

Germany and Britain were not the only nations with submarines in the First World War. France, Italy, Russia and Austro-Hungary were also in the game.

On April 27, 1915 a French battleship, the Leon Gambetta, was sunk in the Straits of Otranto by an Austro-Hungarian sub commanded by Lieutenant Georg von Trapp, who later life would marry his children's tutor Maria, and become the basis for the musical and Hollywood film The Sound of Music.

The shock of submarine warfare slowly wore off as the First World War progressed.

Hydrophones — which allowed ship captains to listen out for the giveaway propeller noises of submerged submarines — were developed in 1916 and the following year depth charges were deployed for the first time.

"The Germans never seriously threatened British naval supremacy in the First World War, despite some notable triumphs…They mounted another determined, unrestricted campaign at the end of the war. It failed because the Allies had introduced universal convoys and put heavy protection around them. Even if the U-boats, which did not operate in wolf packs in the First World War, spotted a convoy often they simply could not catch them. That would have required fast transits on the surface where they were likely to be swiftly spotted and attacked by Allied escort warships, which by 1918 had effective depth charges and were numerous," Mr. Ballantyne told Sputnik. 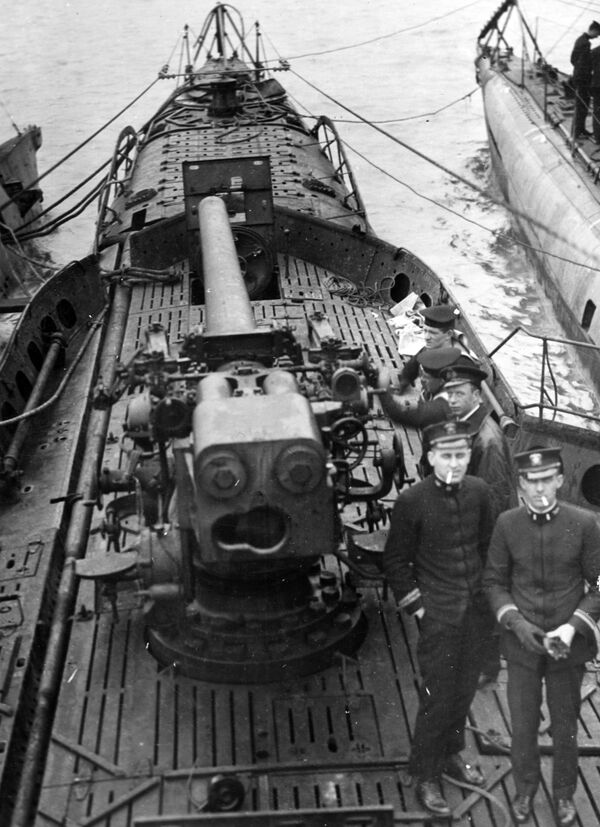 US Navy and Royal Navy sailors inspect A German WW1 U-boat after Germany’s surrender in 1918
© Photo : US Naval History and Heritage Command

Navies and inventors had been experimenting with underwater craft for 100 years before the First World War but the invention of petrol and diesel engines really made submarines possible.

Submarine Development Had No 'Eureka' Moment

"It was an incremental process stretching back centuries — rather than a single ‘eureka' moment. It was the practical genius John Philip Holland, an Irishman who emigrated to the US in the 1870s, who put it all together in a truly balanced, reliable and workable craft, allied with an effective weapon that was by then available, the self-propelled torpedo. The US Navy pressed his Holland VI submarine into service in October 1900. The design was also bought by other fleets, not least Britain's and became the basis for all submarines that followed, including in the Russian Navy," Mr. Ballantyne told Sputnik.

So how different are modern-day submarines from those of 1914-18?

"The basic principles are the same — but in terms of capabilities there is no comparison between First World War vessels and today's. The British did produce remarkable submarines as did the Germans, which were comparable in many ways to those diesel-electric boats of the Second World War. The advent of nuclear power in submarines after the Second World War led to a great increase in size, speed, and crews needed to operate them, plus quantum leaps in armament and other systems and sensors. The endurance of a modern nuclear submarine is such that it can spend weeks, if not months, submerged and sail around the world without surfacing — a feat that is a universe removed from the capabilities of First World War craft, which could only last a matter of hours dived before having to surface," Mr. Ballantyne told Sputnik.

The views and opinions expressed by Iain Ballantyne in this article are those of the speaker and do not necessarily reflect Sputnik's position.