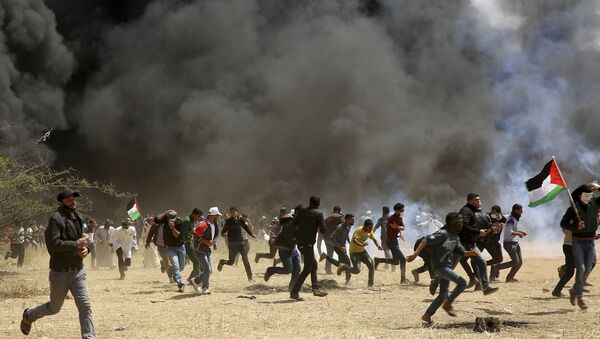 Tensions between the Israeli Defense Forces and Palestinian protesters have been running high, with the latter throwing firebombs at Israeli servicemen.

Two Palestinians, including a 14-year-old teen, were killed, whereas over 80 others were injured as a result of shots fired by Israeli soldiers at a border protest in the Gaza Strip on Friday, Gaza's Health Ministry reported.

According to the ministry's statement, a 14-year-old teenager died from a gunshot wound to the head. Earlier it said that the other victim was 43-year-old Ghazi Abu Mustafa.

Israel ‘Strangles’ Palestinians by Suspending Energy Supplies to Gaza
The Israeli military has repeatedly stressed that it opens fire "in accordance with the rules of engagement," as Palestinian protesters throw firebombs and rocks at the security fence and soldiers along the border, as well as launch arson balloons and kites from the Gaza Strip into Israel.

Hostilities between the Israelis and the Palestinians near the Gaza border have increased since late March, which marked the beginning of the Palestinian protest campaign against Israel — the Great March of Return.