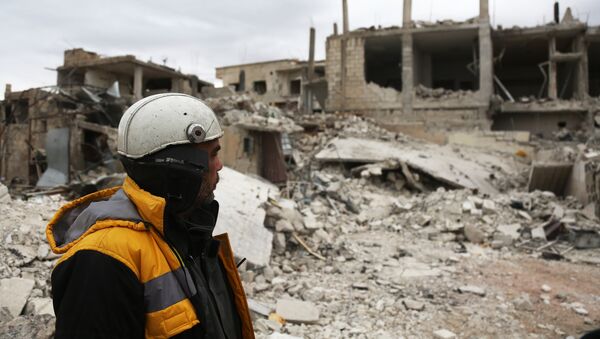 Hundreds of members of the so-called Syrian Civil Defense, the White Helmets, have been evacuated from southwestern Syria to Jordan, via the occupied Golan Heights by the Israelis. Sputnik discussed this operation with military experts Amin Hteit and Vladimir Fitin.

During the Syrian conflict, the activists of the White Helmets have been involved in "the most odious provocations" and their evacuation reveals their true nature and hypocrisy, the Russian Foreign Ministry said Monday.

A military expert, former Lebanese Army general Amin Hteit in an interview with Sputnik confirmed the Russian foreign ministry’s statements, saying that, "the evacuation of this group clearly shows that this is a Western product in the full sense of the word."

White Helmets Evacuation From Syria Reveals Organization's True Nature - Moscow
According to Hteit, the White Helmets carried out the task of creating a given information background to justify any “aggression” by the United States, France and Britain against Syria.

“What we are seeing now is how the creator has rescued its creation,” Hteit said.

“I say so, because there is some evidence for this. First of all, the group was created by the United Kingdom with US support; secondly, their training took place in the military camps of Israel, and then they were sent into Syria; thirdly, their alleged documentary reports were filmed at the behest of British and American intelligence. They were supporting the ongoing operations against Syria via their information campaign,” the retired general told Sputnik.

In an interview with Sputnik, an expert from the Russian Institute for Strategic Studies, Vladimir Fitin, said that the videos made by the White Helmets were created on the orders and with the money of the British and US intelligence services.

France to Accept Some of White Helmets' Members After Syria 'Evacuation'
"Now they are being urgently taken out of Syria so that they do not fall into the hands of the rapidly advancing Syrian army,” Fitin said.

He went on by saying that while only a part of the members of the White Helmets were removed, the rest continue to work in the terrorist-controlled territories.

“It is quite possible that they will release some provocative new video,” the expert said.

Earlier it was reported that the Israeli forces have evacuated several hundred White Helmets and their family members from southern Syria to Jordan at the request of several Western countries. The transfer has been labeled a "criminal operation" by Damascus, which believes the NGO’s members have cooperated with terrorists and plotted several false flag attacks.

Tel Aviv commented on the information regarding the militants' extraction from Syria and their alleged work with Israeli intelligence agencies, saying that it is a humanitarian operation.

The White Helmets claim to be acting as a volunteer rescue group, but has been repeatedly accused of working with jihadists, such as al-Nusra Front* and staging fake videos that they later use to accuse Damascus of being responsible for attacks against civilians.

The group was founded in Turkey by former MI5 officer James Le Mesurier and funded by several western countries. Despite their claims of helping citizens, the Russian Defense Ministry has uncovered evidence and found witnesses suggesting that one of their latest reports of an alleged chemical attack in Douma was a fake.

The views and opinions of the military experts are those of the speakers and do not necessarily reflect those of Sputnik.