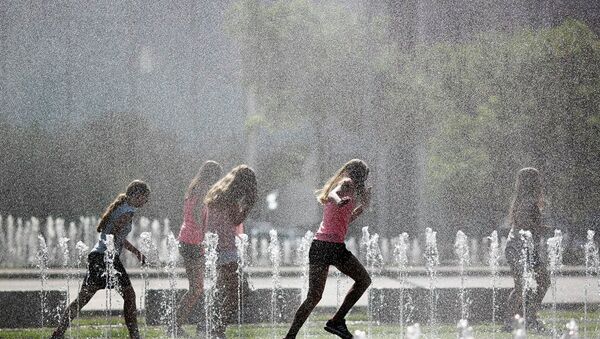 MOSCOW (Sputnik) - The UK House of Commons Environmental Audit Committee on Thursday urged the government to stop shifting responsibility for tackling heatwaves on other bodies and devise a strategy to protect the aging population, warning that the heat-related death toll may otherwise triple by 2050.

"The Met Office has projected that UK summer temperatures could regularly reach 38.5°C by the 2040s. The Government must stop playing pass the parcel with local councils and the NHS and develop a strategy to protect our ageing population from this increasing risk … There will be 7,000 heat-related deaths every year in the UK by 2050 if the Government does not take action," chair Mary Creagh said, as quoted in the committee’s statement, noting that heatwaves results in "premature deaths from cardiac, kidney and respiratory disease."

The report lists a number of recommendations, including the appointment of a minister, who will be in charge of tackling climate change related health risks.

Extreme Heat Wave in Canada Claims at Least 19 Lives – Reports
According to the report, the government should overhaul building regulations to prevent overheating and endorse stricter water efficiency standards, change its planning policies to "ensure homes and transport networks are able to deal with extreme heat," and even introduce special labor regulations at a time of heatwaves.

The government should also make sure that cities have sufficient green spaces and heat-resilient infrastructure, while local authorities must regularly report on the measures taken with regard to heatwaves, the report added.

The committee also stressed the need for a "a year-round heatwave alert system," instead of the current one running only from June to September.

Earlier in the day, the committee unveiled its report titled "Heatwaves: adapting to climate change." The report comes amid warnings from the UK weather service, the Met Office, that this week’s temperatures may break the all-time UK record of August 2003 and reach 38.5 degree Celsius (101.3 degree Fahrenheit).