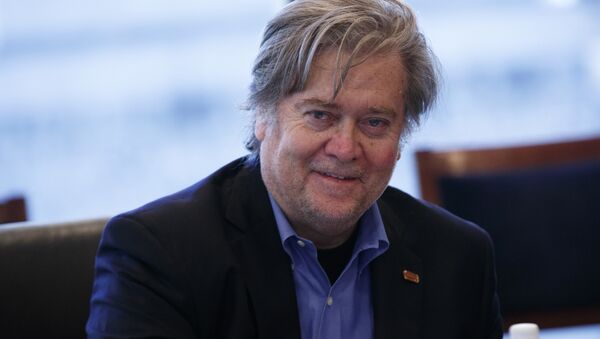 © AP Photo / Evan Vucci
Subscribe
International
India
Africa
A former high-ranking member of the White House administration, who played a key role in Donald Trump’s ascent to the presidency, offered his take on how Washington should deal with Moscow.

Trump's former strategist and investor Steve Bannon has announced that the United States should not regard Russia as an enemy.

"The Russians are part of the Judeo-Christian culture," he said. "We don’t need to pick a fight with them. The Cold War has got to come to an end. We can’t be fighting everyone all the time," Bannon told Haaretz.

'They Weren't Discussing Cricket': Johnson, Bannon Held Secret Talks – Reports
According to him, the United States should improve relations with Russia in order to isolate China, just like when Richard Nixon and Henry Kissinger decades ago sought to increase rapport with Beijing in order to isolate Moscow.

The foundation, which is to be called "The Movement," will be tasked with polling, research consultations on messaging and data targeting for right-wing parties in Europe and is expected to help them win as many as a third of the seats in the European Parliament after the next elections in May 2019.

Before being forced out of the White House in August 2017, Bannon was a key figure in Trump's successful campaign bid and was for a time considered to be Trump's chief political strategist.