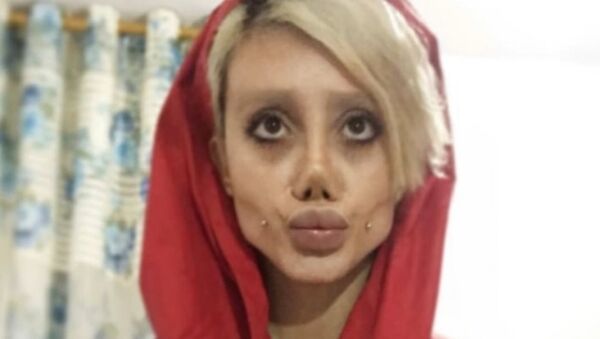 Sahar Tabar first made international headlines last year, with media speculating that the Iranian girl had had “50 plastic surgeries to look like Angelina Jolie,” but ended up looking more like a character from Tim Burton’s Corpse Bride.

After causing a firestorm on social media with her spooky looks, Tabar revealed that she never wanted to replicate Jolie and was just messing around for fun, using make-up and digitally altering her images.

Tabar recently published unretouched photos of her au naturel, which actually confirm that she looks nothing like the Corpse Bride, even though she has had some plastic surgeries, including rhinoplasty, liposuction and cosmetic procedures to give her fuller lips.

Speaking with Sputnik last year, she admitted to having some similarities with both the A-lister and the character from “Corpse Bride,” but stressed that it was not her initial goal – she is her own “muse” and doesn’t want to look like anyone.”

“Every time I publish a photo, I make my face more fun. It is my way of self-expression, a kind of art,” Tabar said.