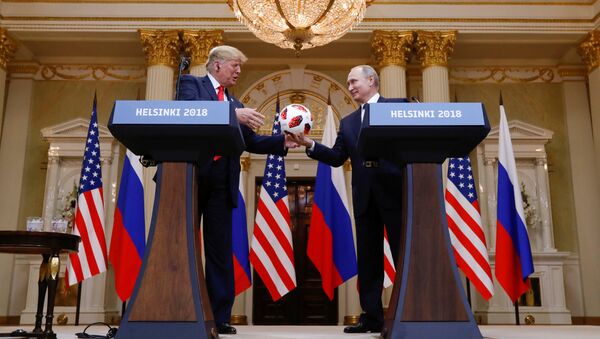 President Trump backtracked from his comments about alleged election interference amid a backlash from Washington. He said he had misspoken on the alleged meddling, saying he meant to say that he saw no reason why Russia wouldn't have been involved. Radio Sputnik discussed this with Waddick Doyle, a professor at the American University of Paris.

Sputnik: What are your thoughts on Trump’s U-turn on the election meddling issue? Has it genuinely been a slip of the tongue or has the pressure on the President played its role in his change of heart?

Waddick Doyle: One has to understand with President Trump is that he comes out of television and particularly reality television. He has a media technique of constantly attracting attention to himself by making statements that disrupt people’s expectations and so in making this statement he completely disrupted people’s expectations. They never expected the president of the United States to challenge the intelligence services in the United States and then in backtracking again he brought media attention to himself.

So I see it in this perspective of an attempt to do it and a lot of this has obfuscated actual real substantive issues in the summit. There has been very little media discussion of those: that is Syria, Iran, Crimea, and Ukraine. So I see it as a sort of technique more than, say, a mistake or not a mistake.

Sputnik: What the American media is making of this is quite frightening. Some of the members of various parties in US congress are also saying that it’s time for us to know what Putin and Trump discussed behinds closed doors. They are saying, “We don’t believe that he misspoke and if he was that soft on Putin publically we can’t imagine what he was possibly doing behind closed doors.” There were even requests to disclose to the world what was being said behind closed doors. There is a lot of talk about US intelligence services not trusting Donald Trump. What are your thoughts on all of that?

Waddick Doyle: Certainly the whole issue has been transformed into an American domestic issue about confidence in the president, and is less about Russian-American relations. In that process is the demonization of President Putin as well, which, of course, Trump’s policy of dialogue is the whole tradition of American dialogue from Nixon’s discussions with China, from the discussions with Brezhnev and so on. There has been a tradition of casting the idea that discussion with Putin is itself reprehensible [that] seems absurd.

Sputnik: The Senate has been actually contemplating introducing bills that would target Russia with more sanctions in the case of election meddling. What do you think is going to happen with that? Do you think we can expect more sanctions on Russia?

Waddick Doyle: We have heard the recent announcement of a planned meeting between the ministers of defense of the US and Russia and this is despite a 2014 Congress ruling, which virtually outlaws military cooperation between Russia and the US. I think there is also a possibility of the chiefs of staff speaking to each other.

There was a phone call. So in terms of decreasing world tensions, they have seen positive signs. Now in that context there is a very difficult and complex political game that is the basis of Trump’s electoral success. So one level, a return to electoral protectionism and protecting American industry and American interests in the sort of withdrawal from the world.

And the other level, a support of the right-wing Republican Party, which was vehemently opposed to Russia historically from the times of the Soviet Union and so on. The anti-protectionist side of Trump and the more isolationist side of Trump is in favor of the cooperation with Russia and the Republican Party’s right-wing support of a triumphal position in the US is absolutely opposed to that. So he has to play those two elements against each other and that’s the complex basis of his power.

How it will play out: don’t know. I doubt whether he will sign more sanctions. If he does, it will be a sign of him losing authority within the American political establishment.

The views and opinions expressed by Waddick Doyle are those of the professor and do not necessarily reflect those of Sputnik.