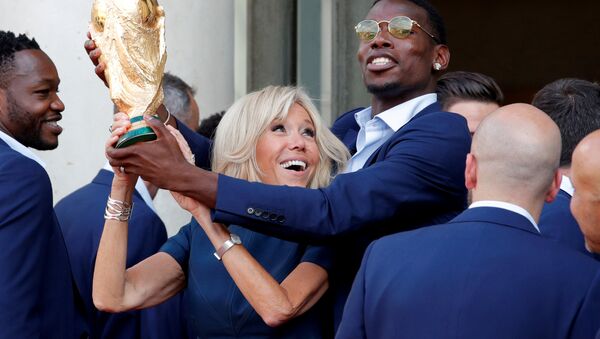 © REUTERS / Philippe Wojazer
Subscribe
The French star, well known for his playful behavior in public and for liking social media attention, has stolen the show yet another time amid reports about his desire to follow Cristiano Ronaldo and join Italian giant Juventus.

According to Italian outlet Tuttosport, Paul Pogba, a French midfielder who is currently playing for Manchester United, is keen to leave England and is seeking to make a comeback to Juventus. The Italian team's 100 million euro deal with Portuguese icon Cristiano Ronaldo is allegedly one of the main reasons behind Pogba's desire to return to Serie A.

Getting Back With the Old Lady

The report surfaced several days after France's World Cup victory. In a video filmed during the French squad's celebrations, Juventus midfielder Matuidi asked his teammate to return to the club. "Ooh, the Old Lady, the Old Lady," Pogba smiled in response, referring to Juventus's popular nickname.

While Paul Pogba keeps hitting the newswire, Sputnik takes a look at the top 5 moments that saw the star midfielder steal the show.

At a press conference held shortly after the victorious World Cup final, Paul Pogba was filmed dancing on a table and spraying champagne over Didier Deschamps and a group of journalists, chanting the name of their head coach.

In another post-match video, Pogba is seen cradling the long-awaited trophy and singing, "It's coming home," a chant widely associated with the Three Lions.

He can also take credit for bringing Shaku Shaku, a popular Nigerian dance, to the global stage.

Shaku Shaku has won the #WorldCup!!! Give it them Paul Pogba!!! pic.twitter.com/LD85yulWJ0

Dabbing with the President

Shortly after Les Bleus arrived home, they were hosted by President Macron. Paul Pogba easily talked the head of state into making an improvised dab move, prompting loads of light-hearted comments from fans on Twitter.

"If possible a small dab?"

‘Messi or no Messi, We Kill Them!'

The French star showed inspirational sportsmanship throughout the tournament, too. In a documentary aired by TF1 TV Channel, he rallied his team ahead of the round of 16 clash against Argentina. "Today we will 'kill' them. Messi or no Messi I don't care!" Pogba told his teammates. "I don't want to go home!"

Pogba: "Messi or not Messi, we fight. We're coming to win this f**king World Cup."

The 25-year-old had spent four years on Juventus after moving from Manchester on a free transfer in 2012.

Juventus watched the French midfielder pick up four Serie A titles and turn into the world's most expensive player, making the Red Devils have second thoughts about letting Pogba go. In 2016, he signed with United on a record-breaking 110 million euro deal to win the EFL Cup and the Europa League.