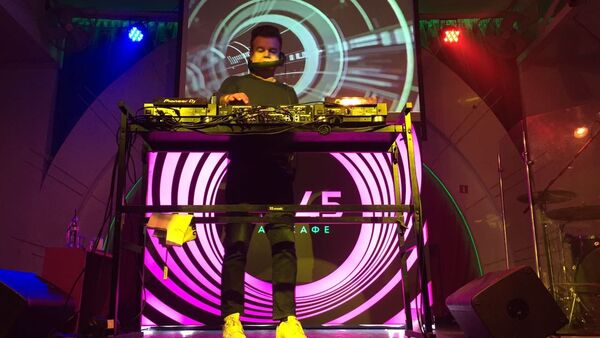 The 2018 World Cup in Russia has come to an end but the festive mood and powerful emotions are likely to remain with millions of fans for a long time. After the final France-Croatia clash, Sputnik talked to legendary British DJ Paul Oakenfold, who shared his impressions of Russia and the championship after having a long tour across the host cities.

Paul Oakenfold, a three-time Grammy Award nominated DJ and record producer, apart from his world famous remixes for artists such as Madonna, U2, The Rolling Stones, Depeche Mode and many others, is also known for his football-related songs. Oakenfold authored the non-official anthem of the England national team at the Euro Championship two years ago as well as recorded a soundtrack for the video game FIFA Football 2005. This year, he made a song for the Soccer Aid charity game that took place on June 10 and then set off on a tour, performing at the FIFA Fan Fests in the championship host cities across Russia.

Sputnik: You have DJ-ed at fan fests in a number of Russian World Cup host cities, as well as visited some games. Obviously you have visited Moscow before, but what about the other Russian cities you visited this time? What were your impressions of these cities?

Who’s here for the #WorldCup? ⚽️

Sputnik: Which of the cities that you visited did you like best?

Paul Oakenfold: I really enjoyed Nizhny Novgorod; that was really nice. Samara was nice. These were beautiful places because I got shown around and I had fun. But when you come to Moscow and you see so many people who love football from around the world, and the fans and so many people — I think that a lot of people who have come to Russia from around the world for the football have really enjoyed it.

Sputnik: Do you think this championship actually changed the perception of Russia in the world?

Paul Oakenfold: Yes. Absolutely yes. The eyes of the world look at Russia and everything has been great: the games, the promotion; the stadiums are all brand-new, there is no violence; the people have been very friendly. I think it's been wonderful.

Sputnik: Is this trip somehow different from your previous ones? Have you noticed any profound changes brought about by the World Cup in Russian society?

Paul Oakenfold: Of course it's different, because it's the World Cup. Changes — yes. More Russians speak English, [it's] a celebration, because Russia have done very well, everyone is happy; because before the World Cup, a lot of Russians didn't think the team would do well. And they nearly got to the semifinal of the World Cup. Nearly — just because of a penalty. It's a celebration for the country.

Sputnik: You've just watched the final. How was it? Did you cheer for France?

Let’s do this! #WorldCup ⚽️

Sputnik: What do you think of England's performance during the championship? Did you expect that the team would make it that far?

Paul Oakenfold: They did very, very well. No one expected we would make it so far. Just like no Russians expected the same.

Sputnik: In the wake of the significant deterioration in Russia-UK relations, British media published numerous anti-World Cup articles trying to dissuade fans from coming to Russia. Has this somehow affected you and your work?

Paul Oakenfold: Yeah, I didn't like that. I thought it was terrible the way the British media painted the picture of Russia, of the government. The way they acted, it was not respectful, considering it wasn't true. I was here for two weeks and what the British media was saying is not true. It's not cool.

Sputnik: You have remixed a song by Soviet rock singer Viktor Tsoi called "We want change." What prompted you to record it and do you have any plans to continue working with Russian songs in the future or to reveal some other Russian rock songs to the world?

Paul Oakenfold: First of all, I loved the original [by] Victor Tsoi. So I did the remix. And yes, I would like to work with other Russian bands. Usually they ask me if [I] would remix or produce. But yes, of course I would like to do other stuff.

Sputnik: How do you choose songs to record mixes?

Paul Oakenfold: The record companies or the bands ask me and then I decide whether I'd like to do it or not.

Sputnik: Where do you get inspiration for your work?

Paul Oakenfold: Inspiration comes from different places. Sometimes it's there, sometimes it's not. It's not like you open the bottle and inspiration is there. It's just there; I don't know where it is.

Sputnik: Do you have friends among Russian musicians?

Paul Oakenfold: I have a few friends working music in Russia.

Sputnik: Do you listen to any modern Russian bands or DJs? Swanky Tunes, for instance?