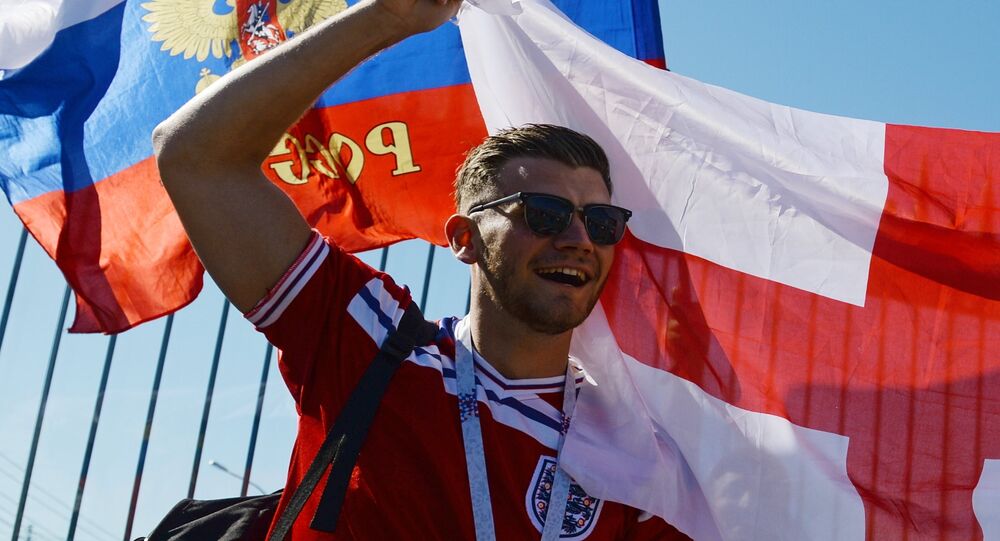 Despite upsetting its fans and yielding to Belgium 0-1 at the 2018 FIFA World Cup, England managed to make it to the tournament's round of 16, where it will face Columbia on July 3.

Upon returning from Russia, English football fan Matt Maybury tweeted that he was safe and sound, blaming British media for "clear propaganda" pertaining to the 2018 FIFA World Cup.

Maybury's remarks came after The Independent cited a team of police spotters monitoring travelling fans as saying that there was "a good atmosphere" between supporters of England's national team and those of rival nations.

Back from 2 weeks in Russia alive.
I wasn’t attacked by blood thirsty hooligans, I wasn’t eaten by a bear & I haven’t been poisoned or killed.
The British media should be ashamed of themselves for their clear propaganda against the Russian people. Absolutely class country 🇷🇺 pic.twitter.com/83sZwjp8Kn

"Fears of violence between England supporters and Russian hooligans have so far proved unfounded," the newspaper reported.

The Guardian, in turn, pointed out that "Russia can be a great place to host a World Cup," saying that "it's likely that a lot of people will depart Russia with great memories and a changed view of the country."

In the wake of the significant deterioration of Russia-UK relations over the alleged poisoning of former Russian intelligence officer Sergei Skripal and his daughter, British media singled out a spate of troubles that foreign fans might allegedly face at the 2018 FIFA World Cup in Russia.

READ MORE: Germany Thank Russia for Hospitality After Crashing Out of World Cup

Ahead of the tournament, The Guardian "revealed" the "darkest sides" of Russia, including alleged nationalist football hooligans and what the newspaper described as poorly-designed stadiums.

© Sputnik / Glebov Yury
Nearly American Volunteer: World Cup-2018 Is a Golden Chance to Return to Russia
While the Sunday Express warned tourists to "be more careful" when photographing places of interest in Russia, the Daily Star described how hard the life of a black football fan in Russia can be.

In March 2018, Skripal and his daughter Yulia were found unconscious on a bench near a shopping center in the British town of Salisbury.

London blamed Moscow for using what UK experts claim was the A234 nerve agent, albeit without presenting any proof. Russia has vehemently rejected the allegations as groundless. Both Skripals have already been discharged from the hospital.