German FM: We Can No Longer Completely Rely on White House 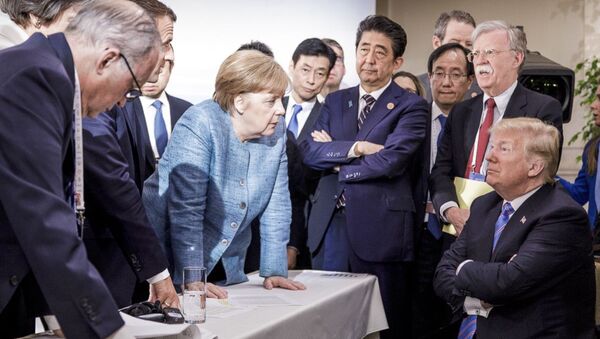 The statement comes a day after US President Donald Trump said he considered the European Union a "foe" while referring to "unfair" trade practicies.

Speaking to the Funke newspaper, Germany's Foreign Minister Heiko Maas said that in order to "maintain our partnership with the USA we must readjust it."

"We can no longer completely rely on the White House," he stated, adding, "The first clear consequence can only be that we need to align ourselves even more closely in Europe."

According to the top official, "Europe must not let itself be divided however sharp the verbal attacks and absurd the tweets may be," apparently alluding to a thread of posts by President Trump on the US-EU trade spat.

Earlier in the day, the European Union's foreign policy chief Federica Mogherini stated that the US remained a "friend" of the bloc, adding that "a change in the administration does not change the friendship between countries and peoples."

"If I was a journalist, I would probably ask him who does he consider his friends. We have very clear in mind who our friends are, the United States for sure and I have said many times that a change in the administration does not change the friendship between countries and peoples. And for sure, we consider the United States friends, partners – close friends and partners. We will always do that," she said.

Their statements came shortly after the US president blasted the 28-member bloc's trading practices in an interview with CNS News.

Trump has on multiple occasions criticized his allies and partners for imposing "unfair" tariffs on US goods, and introduced steep duties on steel (25%) and aluminum (10%) imports from a number of countries, including EU member-states. In a reciprocal move, the EU imposed tariffs on "iconic" US goods, such as jeans, motorbikes, whiskey, worth 2.8 billion dollars ($3.3 billion).

EU Urges US, Russia and China to Avoid Trade Wars, Speed Up WTO Reform
The Trump administration also threatened to slap a 20-percent tariff on European car imports, which reportedly prompted German carmakers to propose abolishing EU tariffs on US cars in exchange for Washington ditching the idea of introducing duties on European vehicle imports.

Tensions between the transatlantic partners further escalated after the G7 summit in Canada when President Trump instructed US representatives not to sign the final communique and accused his allies of taking advantage of the US in terms of trade.