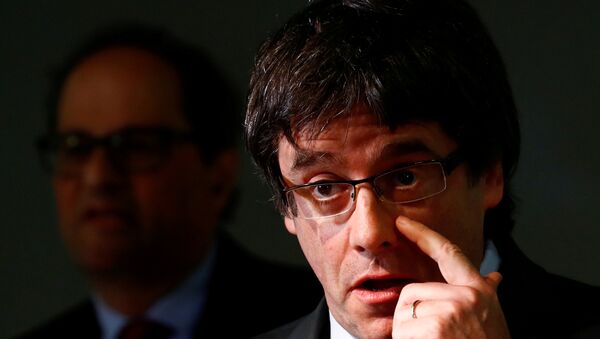 MADRID (Sputnik) – Carles Puigdemont, the ex-head of the Catalan government, said on Thursday he would fight to prove his innocence after a German court ruled that extraditing the politician to Spain on charges of misusing public funds to organize last year's campaign for Catalan independence, not rebellion, which he was accused of, was possible.

"We have nailed the main lie of the state. The German court denies that the October 1 referendum was a rebellion. Every minute that our compatriots spend in jail is a minute of shame and injustice. We will fight until the end and win," Puigdemont wrote on Twitter.

The Calatan politician’s supporters reacted to the court verdict by saying they would appeal Puigdemont's misuse of public funds charges.

In turn, Josep Costa, the deputy speaker of the Catalan parliament, said that Puigdemont’s supporters "will fight to prove there was no misuse of public funds."

The High Court of the Schleswig-Holstein state in Germany, where the politician was arrested and released on bail in March, announced the ruling earlier on Thursday.

All Spanish Politicians in Exile 'Are Challenging Government' - Lecturer
Following the country's decision, the German Sueddeutsche Zeitung reported that the Prosecutor General's Office of Schleswig-Holstein would authorize the Catalan politician's extradition soon.

The Catalan government and parliament were dissolved by the central Spanish government after the October 1 independence referendum and adoption of a regional declaration of independence.

In late October, Puigdemont fled Spain for Belgium, where he was arrested under an EU warrant. However, a Spanish judge subsequently canceled the warrant until such time the investigation into Puigdemont would be completed. The arrest warrant was renewed in March.

Puigdemont was arrested in Germany that same month as he was traveling by car from Finland to Belgium through Germany.

On May, media report emerged that German prosecutors were again seeking to extradite Puigdemont to Spain.

In April, the German prosecutors announced their plans to extradite Puigdemont to Spain. However, the German court then ruled to release Puigdemont on bail. The court decided that extraditing the former Catalan leader to Spain on the charge of rebellion was not possible, since it had not seen evidence that Puigdemont intended to use force to gain Catalan independence.