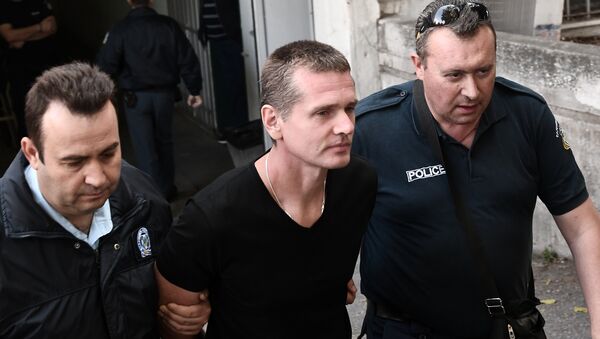 ATHENS (Sputnik) - A court in Greece attempted to make a decision, behind closed doors, on the extradition of Russian national Alexander Vinnik to France, Vinnik’s lawyer Timofey Musatov told Sputnik on Friday.

"Two hours ago a court session took place in Thessaloniki on France's request for Vinnik's extradition… The court was trying to extradite Vinnik through an expedited procedure, which is in place among EU states," the lawyer said.

Musatov added that neither Vinnik nor his legal team had been notified of the session. One of the defense lawyers found out about the hearing and showed up to court to disrupt it. The next session will be held on July 11, according to Musatov.

Amid these reports, the Russian Prosecutor General's Office told Sputnik that Moscow sent a new extradition request for Vinnik.

Vinnik Has Good Chance to be Extradited to Russia, Wants to Cooperate - Lawyer
The officials added they had asked the Russian Investigative Committee to look into the reports of an attempt on Vinnik's life.

Alexander Vinnik has been put on the international wanted list and was arrested in July 2017 in Greece at the request of Washington. His extradition has been also requested by Russia and France.

Vinnik faces up to 55 years in prison in the United States if convicted, as the US authorities accused him of laundering from $4 billion to $9 billion through bitcoin cryptocurrency exchange BTC-E, which he allegedly headed, hacking Japanese exchange Mt.Gox, which led to its bankruptcy and facilitating drug trafficking.