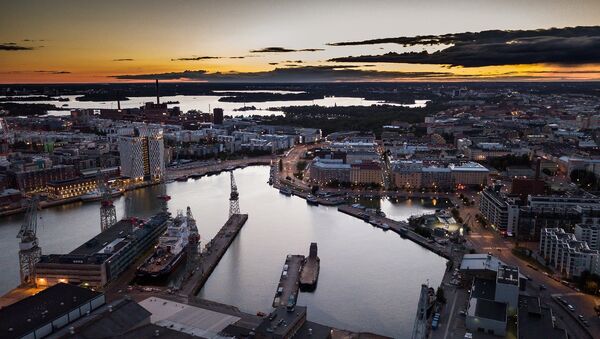 While about 2,000 people, mostly journalists, are expected to gather in the Finnish capital for the Putin-Trump meeting, the prices for a double room on the days of the presidential summit are already as much as €200 ($233) more expensive than the week before.

Hotel prices in Helsinki have increased dramatically against the backdrop of the upcoming meeting between Russian President Vladimir Putin and US President Donald Trump, which is scheduled for July 16, the local newspaper Helsingin Sanomat reported.

In the Sokos hotel network alone, the difference in the cost of a room for two during the summit and a week before is no less than €200 ($233).

"Every time there is a peak demand, prices do increase," Sokotel managing director Jarkko Härmälä said. According to him, this happens every time demand significantly outstrips supply.

At other hotels in the Finnish capital, the difference is also significant, exceeding €100 ($117).

READ MORE: Putin-Trump Summit Likely to Be Held in City of Vantaa Near Helsinki — Mayor

A number of hotels, including those in the Hilton and Scandic networks, currently have no available rooms at all. As explained by Scandic executive director Aki Käyhkö, the network has limited the number of rooms available for booking so that they can cater to those who have made a preliminary reservation, such as international media correspondents. According to Käyhkö, the supply of the available hotel rooms may be expanded next week. He also admitted that hotel prices are expected to grow and exceed the usual level of July as the summit between the presidents of the US and Russia approaches.

"Those days are usually the most quiet in this industry. In that sense, the timing is just royal," Käyhkö said.

Laura Aalto, the executive director of Helsinki Marketing, a company owned by the Helsinki City Council, put the number of people attending the presidential summit at 2,000, most of them journalists. Most members of the press are expected to arrive during the weekend preceding the event.

According to Härmälä, Helsinki may host up to 20,000 people during major rock concerts. Compared to this, the upcoming summit is clearly not in the same class. "In terms of media attention, though, it is a far bigger thing," Härmälä said, projecting a spike in demand.

Helsinki was chosen as a meeting place for the two presidents last week. Before that, other variants such as Singapore were considered.

Previously, Helsinki has served as a neutral ground for meetings between US and Soviet/Russian leaders. In 1975, the Helsinki Accords were signed by US President Gerald Ford and Soviet leader Leonid Brezhnev. In 1990, shortly before the dissolution of the Soviet Union, Finland hosted the last meeting between US President George Bush and Soviet leader Mikhail Gorbachev. In 1997, Helsinki held talks between Bill Clinton and Boris Yeltsin.