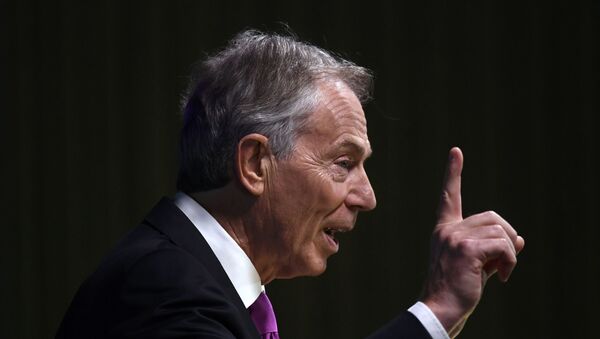 In a speech at Chatham House, former British Prime Minister Tony Blair said that a return to the 1930’s dark politics is no longer far-fetched. According to reports, Blair cited nationalist populism and a widespread rejection of multilateral alliances as the main reason.

Radio Sputnik discussed this with Mark Garnett, a politics professor at Lancaster University and author of the book "From Anger to Apathy: The British Experience."

Sputnik: What’s your take on the “return to dark politics” statement from Mr. Blair? Is it really the case?

Mark Garnett: I think it’s not surprising that Mr. Blair is deeply and genuinely concerned about certain trends and in particular he identifies the mood in which national leaders are urging their supporters to think of their own interests first and the idea that this is leading to a break-up of long-standing alliances, but obviously the allusion to the dark politics of the 1930s is a very easy kind of warning to raise; the circumstances are very different now. I think really what he’s saying is that we are now in danger of having an ugly period in politics, which does raise threats of instability and possibly even rising international tensions.

Sputnik: He’s also underlined the importance of US-UK relations. How do you see London’s and Washington’s ties playing out in the near future? We’ve had a few issues since President Trump came to power with regard to relationship with Mrs. May, but really it continues to remain robust, doesn’t it?

Mark Garnett: Obviously when Mr. Blair is warning about the rise of populism of the right and of the left, he’s talking about this in the context of the Brexit vote, which he very deeply dislikes. It’s another way, I suppose, of making people think again about the Brexit vote; it’s just part of this mood which is leading to rising tensions.

No Deal Brexit 'Devastating' for UK, May 'More Hostage Than Leader' – Tony Blair
And also, I think for him and for Mrs. May, Brexit was one thing which was very difficult to cope with, but the other thing that’s very difficult to cope with is Mr. Trump. What Mr. Trump has done, I think, is to almost reveal the real nature of the relationship between Britain and the US. What he’s done is he hasn’t really paid any attention to the old codes that we used to disguise the fact that this is a very, very unequal relationship and Mrs. May has been forced to accept Mr. Trump’s behavior, which isn’t particularly diplomatic and that has just shown the fact Britain cannot afford to fall out with the United States.

So what Mr. Blair is really saying there is he wants Mr. Trump to return to the “good old days” when US presidents came over to Britain and made these gestures which were intended, really, to make British people feel that they mattered on the world stage. Mr. Trump is clearly not made of that kind of material and so Mr. Blair is really trying to persuade Mr. Trump not to expose Britain’s weakness in this current situation, because, of course, Britain’s weakness in the world is something which doesn’t help it in its negotiations with Brexit. I think how you would interpret Mr. Blair’s speech is that Brexit is a very terrible thing and that the dark forces, the dark politics he’s talking about are really things which endanger his style of politics and which expose Britain’s position in the world.

Sputnik: Blair has also been calling for Britain to delay Brexit; we know that, you’ve mentioned that. How likely is that going to happen and is that something that should be just put into history?

Mark Garnett: Obviously the legislation has just gone through it looks on the surface as the process is happening. The point is that Mr. Blair’s saying we want this process delayed; in fact it has been delayed, there’s going to be a transitional period and that transitional period is like a piece of elastic that seems to expand forever. There’ll be a declaration that Britain is now, I think most people are no longer fooled by this idea that somehow in March next year, Britain will be a liberated country, but nobody’s going to be bothered about that. People I think are more angry that the government hasn’t actually secured a deal which means that it really does mean something when Britain leaves the EU. So I think what he’s saying, and of course the main point here is that the timetable was set in motion by the British government, it isn’t the EU that’s being accelerating the negotiations, it’s actually the British government which didn’t need to trigger Article 50 of the Lisbon Treaty which began this process.

Political Economy Prof on Brexit: 'EU 27 Are Just Losing Patience With the UK'
So again, what he’s doing is he’s really saying, which I think Mrs. May is probably secretly hoping that somehow there’ll be endless fudges and endless refusals to make the final deal. All of the maneuvers by Mrs. May and the Cabinet seem to be to put off the evil day when the final deal has to be agreed and this is why the pro-Brexiteers in the Cabinet and elsewhere are saying “no let’s get on quickly with the negotiations and if it means no deal at all, then all well and good.” So these are people who are welcoming this prospect. Mrs. May, Mr. Blair and the rest are trying to put off the prospect forever and at the same time, of course, it’s difficult for them to talk about the second referendum people seem not to be terribly enthusiastic about that; so the alternative to that second referendum is an endless transition period in which, in the end, basically Britain stays within the single market, the currency union exists etc. and somehow people by that time will have got out of their populist mood and they’ll just say “oh well, it was worth to try to vote against the EU but we just now have to accept the reality and get on with things.”