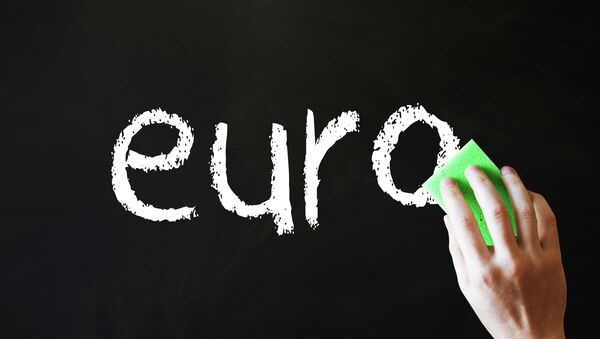 CC BY-SA 2.0 / Images Money / Euro
Subscribe
France’s Finance Minister told the Financial Times that the Franco-German plan for a eurozone budget is non-negotiable and should not be used as a bargaining chip in Europe's migration dispute. The official stressed the political and financial necessity of the eurozone reforms, saying that the status quo was no longer an option.

Radio Sputnik discussed these statements with Gerald Schneider, professor of international politics at the University of Konstanz and executive editor of European Union Politics.

Sputnik: How justified is Mr. Le Maire's apprehension that the issue of migration could be used as a bargaining chip in the dispute?

Gerald Schneider: The political positions of all the states are quite hardened, but it's likely, in my opinion, that some sort of compromise might be reached because some of the Eastern European states have an interest in furthering economic cooperation with the West.

This is also the case for the Italian government. Obviously, the positions have been hardened so much that there's the risk that the negotiations might fail, but I believe that some sort of bargain might be struck in the end, also to save the face of Miss Merkel.

Gerald Schneider: I think that the Eurozone is always in danger because the reform measures haven't gone far enough; there are proposals on the table but it's quite likely that the Eurozone will be strengthened by the key members. What the position of Italy might be, this hangs open in the air, but given the hard stance of Italy on migration, it's quite possible that Italy will receive some concessions from the northern members, including France.

Sputnik: Meanwhile the Austrian Prime Minister is calling for the applications of asylum seekers to be filled outside Europe, it's not going to be very practical, is it? How achievable is this going to be from your view?

Gerald Schneider: Similar deals already exist now. There's Turkey, it's quite likely that there will be investments in the common borders so this is an integration project that might succeed; so the calls for a fortress Europe might receive backing also from countries like Germany. It's not completely clear what the solution might be. It's the distribution of asylum seekers, of refugees across the European states but this might be linked to other issues of economic cooperation.

Sputnik: What was the chance of this particular idea that's being muted by Austria in terms of the migration policy actually getting some traction? Do you think it'll receive support from other EU states? I mean the whole migration question is basically very divisive within the European Union, what's the general consensus then from the EU states on this particular idea from Austria?

Merkel: Berlin Ready for Compromise With France to Reform Eurozone
Gerald Schneider: It's quite clear that there're on the one hand political forces which are calling for further deterrents that no longer a great stream of refugees might come to Europe at some point. On the other hand, there're obviously the Greens and Liberals, who call for upholding the liberal tradition also in this domain and I believe that we'll see measures on both fronts to satisfy both sides.

The practical problem is obviously how to bring reluctant members like Hungary on board here but the power of these countries to jeopardize the European integration project is not that strong, as these governments heavily depend on subsidies from the center of Europe and there're also threats coming from the center in the direction of these member states. So Orban and the Visegrad group are much more divided than one who thinks given statements that are reaching out to the audience.