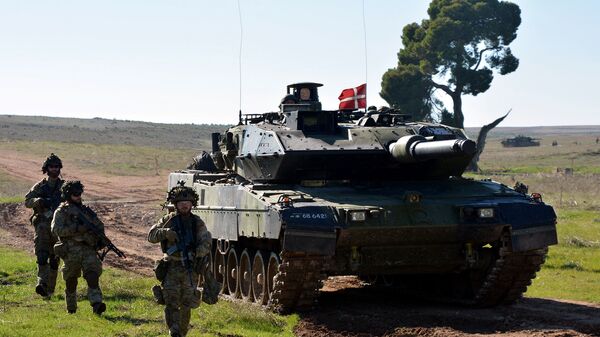 CC BY-SA 2.0 / Allied Joint Force Command Brunssum / Danish Soldiers
Subscribe
The Scandinavian nation is about to join both the French-led European Intervention Initiative (EI2) and the UK-led Joint Expeditionary Force (JEF), which the Danish foreign minister ventured was a signal of European unity to US President Donald Trump.

"Europe needs to take even more responsibility for its own security. So I'm very pleased that Denmark has joined the initiative, because it strengthens our security policy profile and gives us access to a forum of like-minded countries that works to [promote] Danish interests and European security," Claus Hjort Frederiksen said. According to the defense minister, the world has become more unstable due to conflicts in the Middle East and Russia's behavior, which he called "increasingly self-assertive."

The Danish Defense Minister emphasized that the alliance wouldn't change the fact NATO and the US would continue to be the cornerstones of the Danish defense and security policy, but rather become a supplement to increased co-operation between NATO and the EU.

​Later this week, Frederiksen will be traveling to London to mark the launch of yet another military cooperation, the UK-led Joint Expeditionary Force (JEF), which has been in the works since 2014. The JEF is established within NATO's 'framework nation concept' that permits the solving of tasks within and outside the boundaries of NATO co-operation.

Both initiatives have received broad support in the Danish parliament. For the Danish Social Liberal Party, it is an important signal to US President Donald Trump.

"Trump questions our unity in terms of security policy. Therefore, it's good to signal to  the US that we're holding together in Europe," Danish Foreign Minister Martin Lidegaard of the Social Liberal Party said.

Senior researcher Kristian Søby Kristensen of the Center for Military Studies ventured that it was "largely Trump" who got the European defense policy boiling.

The EI2, spearheaded by French President Emmanuel Macron, includes nine EU member states, including France, Germany, Belgium, Britain, Denmark, the Netherlands, Estonia, Spain and Portugal, which all signed a letter of intent in Luxembourg on Monday.

Apart from the UK and Denmark, the JEF includes the Baltic states, the Netherlands, Norway as well as non-aligned Finland and Sweden, which have all agreed to deliver forces at short notice to be dispatched to all forms of conflict around the globe. The participation of individual states will be decided on a mission-by-mission basis.