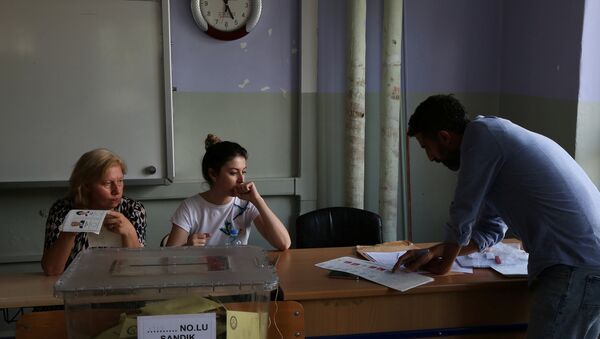 ANKARA (Sputnik) - The Turkish opposition Republican People's Party (CHP) intends to use legal ways at home to address the reports of violations at the elections held this weekend, and if that fails, the party is ready to go to the international organizations, Unal Cevikoz, the party's deputy chair responsible for public diplomacy, told Sputnik.

"Since the beginning of the voting, I think we have received a lot of reports coming from different parts of the country that there have been a lot of irregularities, that there have been some attempts for falsification, etc… And if it is necessary and if the domestic legal procedures are not enough to resolve all these difficulties then certainly the international way is open," Cevikoz said.

However, the CHP plans to address the issues domestically at first, as soon as all the votes are counted.

"I think in general there have been some attempts of violation of the election process but we will see how serious they are and how they have been effective as a result," Cevikoz added.

On Sunday, early presidential and parliamentary elections were held in Turkey. With 99.6 percent of the ballots counted, the Nation Alliance, which includes CHP, the Iyi Party (IYI), the Felicity Party (SP), and the Democrat Party (DP), has secured 33.96 percent of the vote.