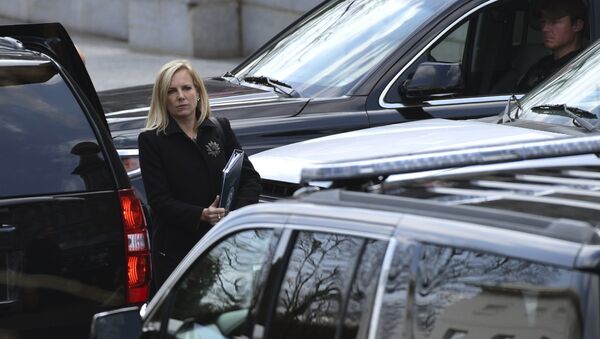 The US Department of Justice (DoJ) is reviewing the conduct of one of its paralegals who participated in a protest that disrupted Department of Homeland Security (DHS) Secretary Kirstjen Nielsen during a dinner at a Mexican restaurant in DC on Tuesday.

More than a dozen protesters with the Democratic Socialists of America (DSA) entered the restaurant Tuesday evening, with one giving a small speech asking, "Secretary Nielsen how dare you spend your evening here eating dinner when you're complicit in the separation and deportation of over ten thousand children separated from their parents?"

The protesters were seeking to make a statement against the since-reformed "zero tolerance" policy, which exacerbated the separation of undocumented children from their parents when they were arrested by Immigration and Customs Enforcement (ICE), an agency under DHS, and therefore Nielsen.

​One of the protesters was Allison Hrabar, a DoJ paralegal specialist. Hrabar caught the ire of conservatives, who called for her firing. The Daily Caller was tipped off by a Trump administration official to her participation in the protest. According to the Washington Examiner, which spoke with Hrabar and a DoJ official, she's still employed by the department but her actions are being scrutinized under an internal review.

Her job could be at risk if the DSA protest was determined to be somehow illegal, but legal experts say that her behavior in the situation otherwise falls under free speech protections by the First Amendment.

Hrabar was accused by the Daily Caller of posting political messages during work hours on her personal Twitter account. That could land her in trouble over the Hatch Act, which limits the political speech rights of government employees. Nonetheless, "If she is expressly supporting a political candidate, there could be a Hatch Act issue. But if she's just expressing her views about public issues, she is protected by the First Amendment," law professor Geoffrey Stone of the University of Chicago told the Washington Examiner.

She allegedly posted, "Keeping families together in jail is not an acceptable solution," Wednesday afternoon, the Daily Caller said. That was after US President Donald Trump issued an executive order he claimed would protect undocumented families from separation after they've been arrested and put in jail.

It's impossible to determine whether her other tweets speak to any political parties or candidates, as she has made her account private. However, Hrabar's comments to the Examiner de-emphasized the DSA's pertinence, saying, "We aren't the only ones who can do this." Anyone "can confront" DHS or ICE agents, she added.

While Hrabar's Twitter account is locked, it is still possible to view her display name, which has been changed to "job haver."

"If she was participating in behavior that constituted a breach of the peace or a trespass — for example, if the store owner ordered her to leave and she refused to do so — that would be unlawful, but so far as I'm aware, there was nothing like that here," Stone told the Washington Examiner.

Heidi Kitrosser of the University of Minnesota, another law professor, highlighted a Supreme Court ruling applicable to Hrabar's situation. The court found in 1987 that a state employee in Texas was within her constitutional rights when she spoke to a colleague after former US President Ronald Reagan was shot and said that should there be another assassination attempt, she hoped it would be successful. "I'd likely start with that case," she told the Examiner.