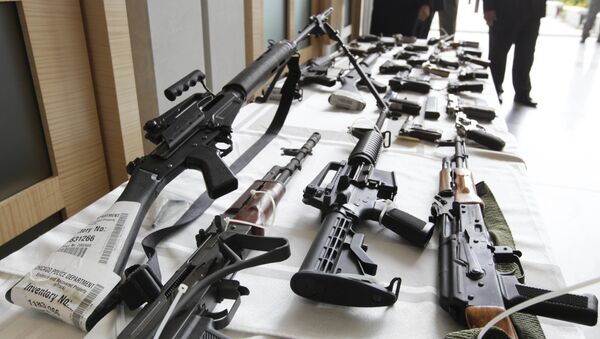 According to the latest statistics, gun ownership among civilians is on the rise, with people in affluent countries holding more firearms than their peers in the developing world.

Even though Americans account for only four percent of the global population, they own 40 percent of the world's firearms, a new study revealed on Monday.

A hefty 85 percent of  the more than 1 billion firearms currently available worldwide are owned by civilians, with police and the military accounting for the rest, according to the Small Arms Survey, based on data from 133 countries and survey results in 56 countries.

Majority of Americans Support Ban on Assault Weapons, Strict Gun Laws - Poll
According to the study, an estimated 857 million firearms are currently in the hands of civilians, with law enforcement and military stockpiles accounting for respectively 23 million and 133 million.

The report said that these numbers include legal and illegal firearms, ranging from improvised craft weapons to factory-made handguns, rifles, shotguns and, in some countries, even machine guns.

​Of the 857 million guns owned by civilians, 393 are in the United States — more than all of the firearms held by ordinary citizens in the other top 25 countries combined.

"The biggest force pushing up gun ownership around the world is civilian ownership in the United States," Aaron Karp, one of the report’s authors, said during a news conference at the UN headquarters in New York.

Moreover, the Americans’ liberal gun laws allow them access to powerful firearms that are not available anywhere else in the world.

According to the Pew Research Center, one-third of Americans over 50 said they owned a gun, compared to only 28 percent of those between the ages of 18 and 29.

India, with 71 million firearms in civilian hands, is in second place behind the US, trailed by China, with 50 million.

​In terms of weapons held by law enforcement agencies, Russia is estimated to have the greatest sum at 2.4 million, followed by China with 1.9 million and India with 1.7 million.

Russia tops the list also in terms of military small arms stockpiles, with 30.3 million units. China is a close second, with 27.5 million, with North Korea bringing up the rear, with 8.4 million.

The US military is estimated to have 1 million small arms in its possession.

Following a deadly spate of shootings, one at a Florida high school that killed 17 and last October’s massacre, in which nearly 60 people were killed and more than 500 injured at a concert in Las Vegas, recent polls in the US have revealed that support for stricter gun legislation is higher today than ever before.