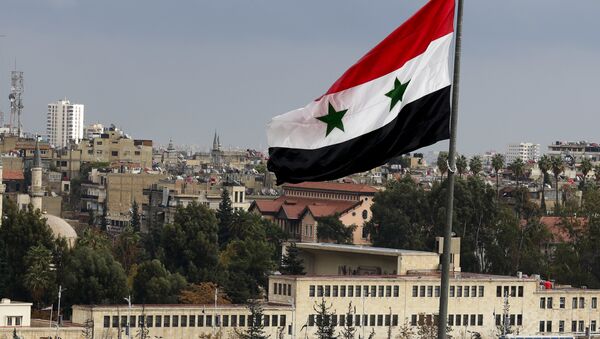 © AP Photo / Hassan Ammar
Subscribe
GENEVA (Sputnik) - Russia is "cautiously optimistic" about the formation of the Syrian constitutional commission after the first day of consultations on this issue with the United Nations, Turkey and some Syrian opposition representatives, Special Presidential Envoy for Syria Alexander Lavrentiev told Sputnik after having concluded the talks.

"We had a very good and constructive discussion, we reviewed the issues that will be put on the agenda tomorrow. Tomorrow we will have bilateral and trilateral meetings," Lavrentiev said, having just finished the meeting with de Mistura.

Delegations of Russia, Turkey and Iran arrived in Geneva to discuss with UN Special Envoy for Syria Staffan de Mistura, as well as among themselves, the progress and process of forming the Syrian-only body to review the country's legislation — constitutional commission.

Russian FM: Moscow Seeks Swift Enactment of Syrian Constitutional Commission
"It was constructive with the Turks as well, as all the meetings that we held today. I would say we now feel cautious optimism," Lavrentiev added.

The bilateral meeting with the Iranian side, led by senior advisor to Iran's foreign minister in political affairs Hossein Jaberi Ansari, is scheduled for Tuesday morning.

Afterward, the three guarantors and Staffan de Mistura will hold a joint discussion.

The Syrian sides were not invited to take part in these two-day talks, but Moscow and Astana platforms arrived in Geneva and met with the Russian delegation earlier on Monday.

The composition, as well as work mechanism of the commission which will be tasked with amending the current or drafting a new constitution, is the main and only topic on the agenda.