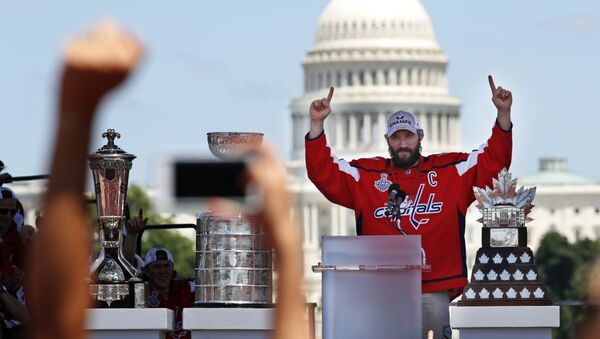 Team members and fans have not stopped celebrating since the Washington Capitals beat the Las Vegas Golden Knights last Thursday to win the franchise’s first NHL Stanley Cup trophy in its history.

Capitals team captain Alexander Ovechkin, who is often referred to as "the Great Eight" or "Ovi," has been spotted all over Washington since the big hockey win, celebrating with his beloved trophy — and his besotted fans.

​The festivities went to a whole new level Tuesday as fans paraded through the streets of the nation's capital. "Ovi! Ovi! Ovi!" they cheered as the Capitals, known simply as the "Caps" by fans, moved down Constitution Avenue on a bright red bus Tuesday afternoon.

​Goaltender Philipp Grubauer even ran down the street, waving the city's iconic red and white flag and high-fiving fans with a huge smile on his face.

​"I was thinking of taking a nap," one Caps fan who works nights told WTOP's Neal Augenstein. "But there's too much excitement in the air, so I'm just going to take it all in and chant when everyone else chants."

​The onstage rally at the National Mall started around 1 p.m., as players made it on the stage to Chuck Brown's "Bustin' Loose." They were introduced individually and continued to do what they have been doing best since their historic victory: chugging lots of beer. Right winger TJ Oshie even pulled his shirt over his face and drank beer through it. Ovi, who was the last player to be introduced, held the Cup high above his head as the crowd exploded in cheers.

​The Capitals' victory is the also the first major sporting win for Washington, DC, since their professional football team, the Washington Redskins, won the Super Bowl in 1992.