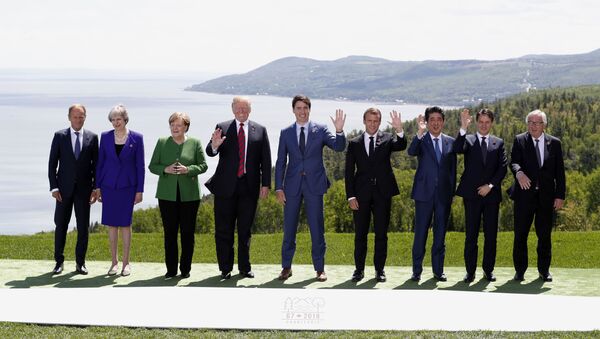 © REUTERS / Yves Herman
Subscribe
According to US media reports, UK Prime Minister Theresa May will use the G7 summit in Canada to put out a plan to counter alleged Russian aggression. The plan was reportedly divulged by UK Foreign Secretary Boris Johnson in a closed door meeting with Conservatives.

Sputnik discussed this with Srdja Trifkovic, a Serbian-American writer on international affairs and foreign affairs editor for the magazine Chronicles.

Sputnik: What are your thoughts on the reports that the UK will once again accuse Russia of aggression?

Srdja Trifkovic: My first thought is just the Brits because in reality the United Kingdom is for all intents and purposes the most russophobic country in the world today. And I'm really talking about the elite class, the politicians, the media, the analysts, the academia; even more so than the United States. This has been a constant feature of the upper tier of the British society; what Prime Minister May and Foreign Secretary Johnson are naming as the nature of the threat, if the reports are accurate, is exactly the sorts of activities that Western countries, including the United States, have been engaging in, not for years, but for decades, including election meddling, regime change operations, illegal aggression and so on. It is indeed somewhat ironic that the pot is calling the kettle black.

Last, but no means least, the continental Europeans maybe less willing than before to follow this clarion call, especially since, in the aftermath of the Skripal case, when many of them decided to support the British version of events, some of them have had second thoughts and it increasingly looks like it was a false flag operation. Following Mrs. May and Mr. Johnson on the same path of escalating the tension with Russia, which is not really in the interest either of Italy, that has a new government which may change course, but primarily Germany and France, which have been at the receiving end of the financial cost of sanctions, while at the same time Britain and especially the United States had very little to lose.

Sputnik: Theresa May is set to announce a new international rapid response unit to deal with Russian assassins in the wake of the Salisbury poisoning outrage. What are your thoughts on this?

Srdja Trifkovic: Well as I said, she seems to be taking it for granted that it was indeed a Russian-conducted operation to murder former colonel Skripal and his daughter, as we now know, since they survived, that the whole thing is beginning to look like a set up or a false flag operation. Many people who initially supported the British version of events are really having second thoughts.

Sputnik: This was leaked during a meeting with Boris Johnson at a dinner meeting, supposedly. What would this look like? And what are your thoughts on what this rapid response could actually be?

Srdja Trifkovic: When we say rapid response it doesn't necessarily mean a military force, it will be a combination of cyber specialists and propaganda experts, and various forensic information technology experts and so on. Really there is much more smoke than real fire about the whole thing, and let's remember that the rating of Boris Johnson as Britain's Foreign Secretary is pretty low, his stock is not very high either in Britain or in the international circles, so I think in the end this will be much ado about nothing.

Sputnik: What are your thoughts on the state of Britain and Brexit, and Prime Minister Theresa May's status right now in light of the David Davis scandal and his threats to leave?

Srdja Trifkovic: It seems to me that she would in her heart of hearts prefer not to go ahead with it if she could, and let's not forget that in the run-up to the 2016 referendum she was really pretty wishy washy. Boris Johnson was all for leaving the EU, but Theresa May was not, and now I think she finds herself in a semi-paradoxical situation of having to see it through, without having a clear picture of what it will mean if Brussels stays firm; if it will indeed be a very hard Brexit.

At the same time her attempts to revive the special relationship with Washington, in the light of the fact that without anchorage in Europe, this trans-atlantic relationship would give Britain an alternative strategic vocal point, I think that there is no real chemistry with Trump.

Sputnik: The Western media, for the most part, has been showing this G7 Summit as the six against Trump. I'm just wondering what do you think about the inner workings of the summit and the relationship between all of the leaders? On the other hand, we have Donald Trump who actually says that Russia should be part of the G7, what do you think?

Srdja Trifkovic: Personally I think indeed Russia should, even though in terms of the actual size of Russia's economy it has been rather stagnant in global terms. Russia's share of the world economy has not gone beyond 2% for a great number of years, but first of all misusing the G7, which should be focused on economics and on financial flows to advance yet another russophobic hysterical plan is self-defeating, and I don't think that May will get very far.

As far as the continental Europeans are concerned, with the new government in Italy we really do have a new ball game and I believe that there will be increased pressures, particularly, from the business community in Germany not to escalate tensions any further. At the same time we should not underestimate the ability of Europeans to be supine, to submit themselves to the dictat from Washington after all. In view of what we've seen since the imposition of the Russian sanctions in 2014, the clout of the United States, the ability of Washington to impose its will on the Europeans is indeed both surprising and remarkable.