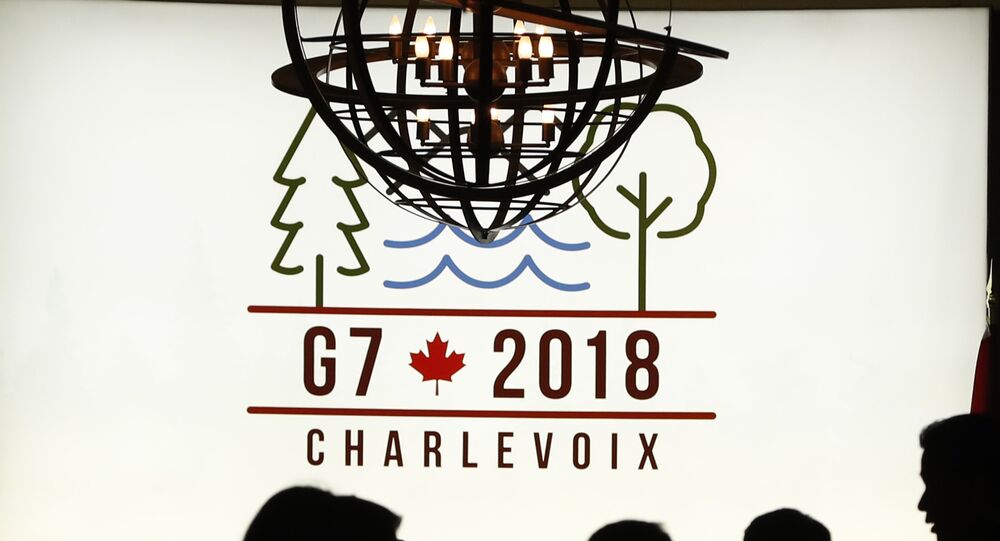 The G7 Summit is currently taking place in Charlevoix, Canada. The Group of Seven (G7) includes Canada, France, Germany, Italy, Japan, the United Kingdom, and the United States. The leaders of the G7 group will further discuss Syria, Iran and North Korea, the French president said.

"We will have, this evening, a group discussion on North Korea — and you will have a very important meeting in Singapore — on Syria, on Iran," Macron told Trump in front of reporters in Quebec on Friday.

Meanwhile, Emmanuel Macron appeared upbeat about prospects on trade with the United States as he emerged from a bilateral at G7 Summit with President Donald Trump.

"I think, on trade, there is a critical a path, but there is a way to progress altogether. We had a very direct and open discussion. And I saw the willingness on all the sides to find agreements and have a win-win approach for our people," he said, in a transcript circulated by the White House.

© REUTERS / Leah Millis
US-EU Trade Row Overshadows G7 Summit - Analysts
Macron has been fostering a special bond with Trump, paying a state visit to Washington in April and holding frequent phone calls. But he failed to get a waiver from US import tariffs. On Thursday, Macrons warned the duties could isolate Trump at the summit.

Striking a more conciliatory tone, the French president said in Canada that, although sometimes he disagreed with the US leader, "we always speak and share, I think, common concerns and common values. And we share the willingness to deliver and get results together."

Trump, for his part, said he had a special relationship with Macron and they were working out a solution to the EU’s huge surplus in bilateral trade with the United States, after accusing the French president on Twitter of unfairly charging massive tariffs on US imports.

© REUTERS / Yves Herman
Western-Dominated G7 'Declining in Relevance to World Economy' - Analysts
The White House said in a press release that Donald Trump held a productive meeting with Emmanuel Macron on the sidelines of the G7 summit over issues related to trade, Iran, Syria and North Korea.

"President Trump had a productive meeting today with President Macron. They discussed trade, Iran, and his upcoming summit meeting with North Korean leader Kim Jong Un," the release said on Friday. "Both leaders agreed on the need to address all aspects of Iran’s destabilizing activities in the Middle East, including in Syria."

Meanwhile, White House also noted in a press release that Donald Trump and Canadian Prime Minister Justin Trudeau and their respective delegations are close to strike a NAFTA deal.

"President Trump had a great meeting today with Prime Minister Trudeau. The President underscored his willingness to work with Canada to achieve free, fair, and reciprocal trade," the release, as quoted by the press pool, said on Friday. "The two leaders and their delegations are close to a deal on NAFTA, but there was discussion of a bilateral deal."

© AP Photo / Marco Ugarte
Trump Wants Bilateral Deal With Ottawa Instead of NAFTA - White House
Donald Trump also said on Friday that his meetings with Canadian Prime Minister Justin Trudeau at the G7 summit have been productive and contributed to improving trade relations between the United States and Canada.

"Our relationship is very good," Trump told reporters. "We are actually working on cutting tariffs and making it all very fair for both countries and made a lot of progress today."

Asked whether he thought they could get to a joint statement, Trump said: "I think we'll have a joint statement." The US President added that he also discussed with Trudeau the North American Free Trade Agreement (NAFTA).

© REUTERS / Christian Hartmann
Trump Fires Back at France, Canada as Macron Speaks of 'G6' Confronting US
Trump added that NAFTA could be changed into bilateral deals among the involved parties — the United States, Canada and Mexico.

Last week, Trump announced he would remove an exemption on 25 percent tariffs for steel and 10 percent for aluminum from Canada, Mexico and the European Union due to the national security threat posed by the imports of these metals.

Chrystia Freeland, whose country plays host this year to the G7 summit world leaders, said they all stood by US President Donald Trump in his effort at talks with North Korea.

Trump will be the first one to leave the gathering in Quebec early on Saturday as he heads to Singapore for a scheduled June 12 meeting with North Korea’s Kim Jong-un.

"It will be a very good opportunity for the G7 partners and allies to talk to the president [Trump] about that trip and to show him our support," Freeland said at a press conference on Friday.

© AP Photo / Wong Maye-E
Most Americans Support Trump-Kim Summit, Doubt N Korea Will Scrap Nukes - Poll
Trump said previously his summit with Kim would be more of a get-to-know-you event, but hopes are that it will pave the way toward North Korea’s eventual denuclearization.

Canadian Prime Minister Justin Trudeau and Japanese Prime Minister Shinzo Abe during a meeting at the G7 Summit discussed advancements in achieving an agreement for putting the Trans-Pacific Partnership into force, the government of Canada said in a press release on Friday. Moreover, Trudeau and Abe also agreed on continuing collaboration on the denuclearization of North Korea and other issues related to global security.

G7 leaders have been supportive of the upcoming Trump-Kim summit next Tuesday, which may pave the way for North Korea’s denuclearization, whereas Trump’s decision to pull his country out of a deal with Iran to have it wind down nuclear research in exchange for sanctions easing was criticized.

Ahead of the summit, President Donald Trump exchanged contentious statements with EU and Canadian leaders over trade issues sparked by new US metal tariffs.

Canadian Foreign Affairs Minister Chrystia Freeland said at a press conference on Friday that she discussed with US Trade Representative (USTR) Robert Lighthizer bilateral issues, including the North American Free Trade Agreement and the US steel and aluminum tariffs imposed on Canada.

"I did have a meeting with Ambassador Lighthizer, the USTR just now," Freeland said on Friday. "We discussed a number of issues … we talked about NAFTA and we talked about obviously Section 232 and both the steel and aluminum tariffs."

© AFP 2019 / Tobias SCHWARZ
Macron on New US Metal Tariffs: Trade War to Hit American Workers First
Freeland said she also raised the question of the United States’ Section 232 investigation into automobile imports, which could lead to new tariffs on vehicle exports to the United States.

Last month, US Commerce Secretary Wilbur Ross launched an inquiry under Section 232 of the Trade Expansion Act of 1962 to determine whether auto imports threaten US national security and should therefore be taxed.

"The leaders exchanged views on trade and emphasized the need to promote and strengthen the rules-based international trading system," the release said.

Trudeau, Tusk and Juncker also discussed the importance of the Canada-EU Comprehensive and Economic Trade Agreement as a tool for mutual prosperity, the release added.