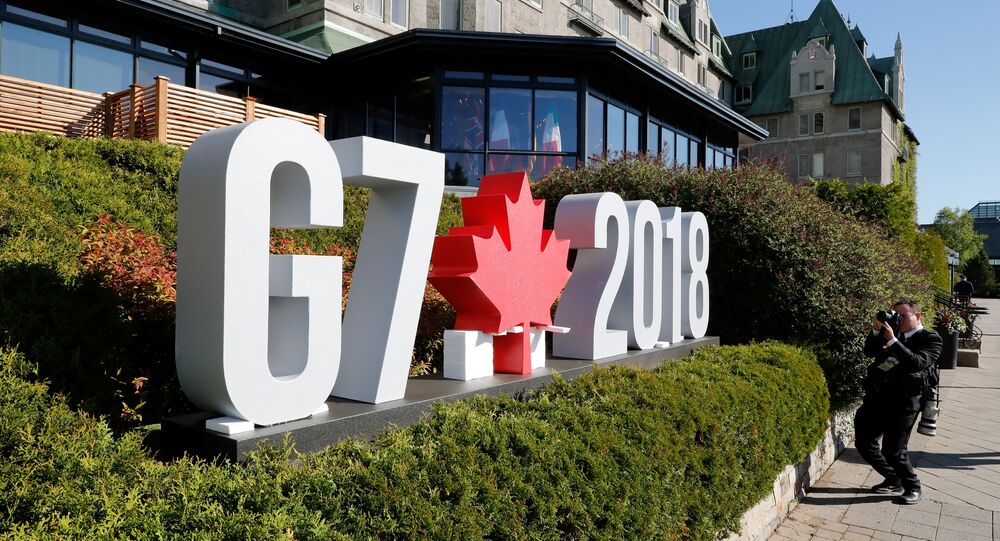 WASHINGTON (Sputnik) - The Group of Seven (G7) is an obsolete gathering that should be replaced by a more relevant organization that includes economic powerhouses like Russia as US President Donald Trump suggested, analysts told Sputnik.

Earlier in the day, Trump told reporters the G7 states should allow Russia to rejoin the group. Trump said the G7 has a "world to run," and Russia should be at the negotiating table.

On Friday, the leaders of the Group of Seven (G7) major advanced economies — namely the United States, Germany, Japan, the United Kingdom, France, Italy and Canada — kicked off a two-day annual summit in Quebec. The group used to be called the G8 before Russia's membership was suspended in 2014 after the outbreak of the Ukrainian crisis.

Trump exchanged contentious statements ahead of the G7 summit with EU and Canadian leaders over trade issues sparked by new US metal tariffs. The rows were only part of the deeper problem of the G7’s decline in influence as a bloc, retired neurosurgeon and political commentator Professor John Walsh told Sputnik on Friday.

"The G7 is declining in relevance to the world economy — more drastically than is generally realized," Walsh said.

© Sputnik / Dmitri Astakhov
Kremlin on Trump's Call for Russia to Return to G8: We Are Focused on Other Formats
In Purchasing Power Parity and gross Domestic Product (PPP-GDP) terms the largest economies were, beginning with number one: China, the EU, the United States, India, Japan, Russia and Germany, Walsh observed.

"The G7 are really the Western colonial and neocolonial powers and their adopted Asian brother, imperial Japan," he said. "They are sliding into the past."

Russia’s economic prospects were bright because of its location and potential for cooperation with both the EU and China, Walsh predicted.

"Russia today stands between two of the powerhouse economies of the world — East Asia and West Europe. Its opportunities are enormous because of its location. Hopefully it will realize those possibilities," he said.

Walsh said President Donald Trump’s call for Russia to be readmitted to the G7, making it once again a Group of Eight (G8) was based upon his economic and business analysis of global developments.

© REUTERS / Leah Millis
This is First Time G7 Is So Controversial, Opposed to US – Academic
"NPR (National Public Radio) is astonished today at Trump’s attacking ‘allies’ on trade while making nice with Russia and calling for it to be admitted to the G7. To me it is not surprising; it is to be expected. Trump cares about economic competition not global hegemony," Walsh said.

Trump recognized that Russia was not an economic competitor to the United States, except possibly in the area of liquefied natural gas (LNG), Walsh commented. China, on the other hand, is a different story, he said.

"For Trump China is a problem, not Russia, even though Russia remains a more powerful military force. And China is only a problem insofar as it is an economic competitor. If China is complementary as in providing a market for the US, China is just fine with Trump," he said.

George Mason University Professor of Law Francis Buckley told Sputnik that Trump’s call on Friday to allow Russia to rejoin the G7 reflected his growing belief that a year and a half of investigations into his alleged collusion with Moscow to win the 2016 presidential election had come up with no substantive evidence.

"I suspect it’s a bit of all of that plus the sense that it’s time to return to the original plan now that the people pushing Russian conspiracy theories have come up empty handed," he said.

© REUTERS / Yara Nardi
US Becoming More Isolationist, UK Forced Into That Role – Analyst on G7 Summit
Special Counsel Robert Mueller has so far failed to bring charges against a single individual on the issue of alleged Trump campaign collusion with Russia, Buckley pointed out.

Friday’s comments were arguably "Trump’s way of forcefully asserting that there’s nothing there," he said.

Canada’s Foreign Minister Chrystia Freeland said Russia’s readmission to the G7 summit of world leaders was discussed during bilaterals, but not formally raised at the summit table. She said Canadian authorities have been very clear about not wanting Russia to rejoin the group after blaming it for the conflict in Ukraine.