CC0 / /
Subscribe
International
India
Africa
The US is implementing its anti-Iran strategy in the Middle East step-by-step, Turkish political observer Mehmet Ali Guller has told Sputnik, explaining why the April 14 missile strike on Syria, the transfer of the US Embassy to Jerusalem and Washington's hesitancy over delivering F-35 fighters to Turkey are parts of one and the same plan.

Washington is trying to engage Ankara in an anti-Iranian bloc by exerting pressure on Turkey with regard to the acquisition of 100 F-35A fifth generation fighter aircraft and the situation around the northern Syrian city of Manbij, says Mehmet Ali Guller, a Turkish political observer.

"Apparently, [National Security Adviser to US President Donald Trump John] Bolton is doing serious preparatory work in regard to Iran," Guller told Sputnik Turkey. "In the near future the US will start a large-scale anti-Iran operation on several fronts and this can be partly observed today. This is a gradual encirclement of Iranian forces, the imposition of economic sanctions [against Tehran], attempts to force the Iranian Armed Forces out of Syria, and the pressure on Iran from the Persian Gulf. The main problem from the US point of view is how to attract Turkey to its side within the framework of this strategy."

Turkey, US Agreed Roadmap of YPG's Withdrawal From Syria's Manbij
According to the political observer, the US has taken a number of measures to force Turkey into following Washington's course.

The development of the situation in Manbij is currently the focus of Ankara's attention.

"More specifically, [Washington and Ankara] are discussing the withdrawal of the Kurdistan Workers' Party (PKK) from the territory of Manbij, with the subsequent transfer of the region under the joint control of Turkey and the United States," the observer underscored referring to the Kurdish People's Protection Units (YPG) which are seen by Ankara as an affiliate of the PKK, outlawed in Turkey.

Links of One Chain

Guller believes that the US strategy in the region has entered an "active phase": The joint missile strike conducted by Washington and its European allies, the UK and France, on April 14, was the first step, according to the observer.

Then, on May 8, Washington unilaterally withdrew from the Joint Comprehensive Plan of Action (JCPOA) also known as the Iran nuclear deal.

On May 14, the US opened its embassy in Jerusalem, officially recognizing it as Israel's capital. Guller believes that the aforementioned events are parts of the US' anti-Iran policy.

"What does the US want? First of all, [it wants] Iran to pull out of Syria. To achieve this goal [the US], in particular, has exerted some pressure on Turkey in order to enlist its support during the further anti-Iranian steps. Let me remind you that Mike Pompeo, speaking about 12 conditions of the Iran deal, said that the US intends to demand that its allies follow this strategy. The Manbij issue should be considered in the context of these steps by the US administration. In general, we can talk about Washington adopting a carrot and stick strategy in relations with Turkey," the observer emphasized.

On Monday Turkish Deputy Prime Minister Bekir Bozdag announced that Ankara and Washington had agreed on the schedule of the YPG's withdrawal from Manbij.

In late January 2018 Turkey kicked off Operation Olive Branch to expel the Kurdish militia from Turkish-Syrian border regions citing security concerns. Having taken control over northern Syrian city of Afrin Ankara signaled it would expand its operation to Manbij. However, the US has reportedly started beefing up its military presence in the region to protect the Pentagon-backed Kurdish forces. 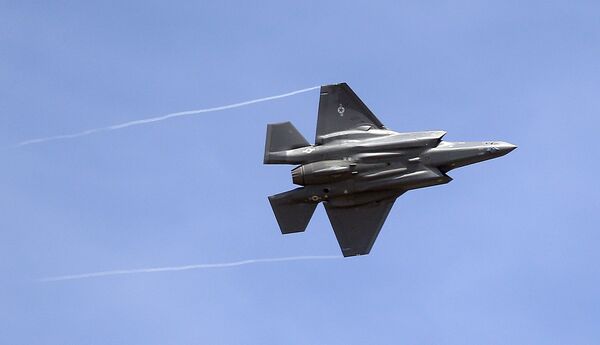 In this Wednesday, Sept. 2, 2015, file photo, an F-35 jet arrives at its new operational base at Hill Air Force Base, in northern Utah.
© AP Photo / Rick Bowmer

Yet another bone of contention is Ankara's purchase of 100 F-35A fifth generation fighter jets, Guller highlighted.

"The issue of F-35 supplies is yet another case showing the pressure exerted by the US on Turkey in response to its decision to purchase the Russian-made S-400 [air defense] systems. However, the F-35 project, which involves nine countries including Turkey, has been underway for 17 years. Therefore, it is not so easy to declare the imposition of restrictions against Turkey on this issue overnight," he explained.

Turkish FM Reveals Date of US F-35 First Delivery to Ankara
According the political observer, the expected acquisition of the aircraft prompts concerns among retired Turkish generals who warn that it could deepen the dependence of the Turkish Air Force on the US. They further note that the F-35 is an extremely unsuccessful and expensive project. "America's positioning of F-35 fighters as a counterweight to Russian S-400 systems does not stand up to criticism from the technical and military points of view," he remarked. "The S-400 is considered to be the best defense system of its class, and the F-35 is the worst project among the fifth generation aircraft."

Still, he noted that Turkey is likely to push ahead with the project suggesting the claim that Ankara was mulling over the purchase of Russian Su-57 fighters was merely a political maneuver aimed at Washington.

Following the meeting of Turkish Foreign Minister Mevlut Cavusoglu with Secretary of State Mike Pompeo on June 5, it was announced that Ankara expects the first delivery of F-35 fighters on June 21.

"We told [the United States] that we do not respond well to threats," Cavusoglu told reporters Monday. "As for the F-35, we have already signed the deal… For June 21, there is going be a transfer for the F-35s. There is no negative development."

The foreign minister earlier remarked that Washington's hesitancy about the delivery of the advanced stealth fighters to Turkey could be a sign of the US' dissatisfaction with Ankara's plan to acquire S-400 which was signed in December 2017 by Russian and Turkish representatives.

Turkish President Recep Tayyip Erdogan has repeatedly urged the US to remain committed to the deal:  "If we are strategic partners, then the US should not make any legal errors in this issue," Erdogan stressed on June 2.

The issues of Manbij and the F-35s could become especially sensitive in light of the upcoming presidential and general snap elections in Turkey set for June 24. Meanwhile, Turkish polls indicate that Erdogan is leading the race with 53 percent of the vote.

The views and opinions expressed by Mehmet Ali Guller are those of the speaker and do not necessarily reflect those of Sputnik.