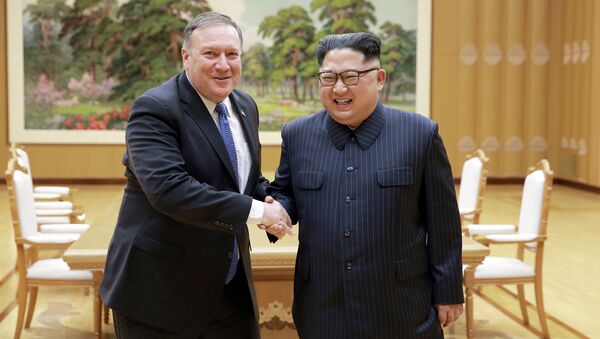 As Mike Pompeo meets in New York for talks with the Vice Chairman of the ruling North Korean Worker’s Party, Kim Yong Chol, officials with the US State Department have said that Pyongyang must provide a blueprint for denuclearization soon if the summit between President Trump and Kim Jong-un is to take place in Singapore on June 12th.

Sputnik spoke to Dr Matteo Fumagalli, a Senior Lecturer of International Relations from the University of St Andrews to find out of the US’ demands are at all realistic.

Sputnik: Of course the North Korean leadership has long maintained that any unilateral demands by the US for denuclearization are a kind of non-starter, is it possible that the US’ position as revealed by this state department announcement could deal a blow to the Trump-Kim summit for June the 12th?

Matteo Fumagalli: Well if this is the premise then definitely the risk of failure is heightened. It’s not too complicated for North Korea to outline a plan; the question is, whether the timeframe that is necessary for North Korea to denuclearise. Is that the root we’re going down, or will it match with the expectations coming out of Washington? Realistically in terms of what is technically feasible, a six month time frame, which seems to be the request coming out of the United States, is not realistic. It would take years. Decades in fact.

Ready to Make History: North and South Korea Put Summit Back on Track
Sputnik: We haven’t heard much from Washington in terms of how seriously it is taking Pyongyang’s demand that it cease joint military drills with South Korea, and end the so-called nuclear umbrella in the Asia Pacific. One couldn’t be blamed for thinking that the chances of Washington rolling back these policies are remote, would you agree?

Matteo Fumagalli: Well if we are to take the promises made by president Trump during the campaign seriously, then it is not impossible to envisage a future, a not too distant future, where the United States may withdraw troops from the Korean peninsula. Now that could be a realistic scenario. That said, one thing is to remove the troops from the Korean peninsula and quite a different thing is to remove the nuclear umbrella. You don’t need American troops on the Korean Peninsula, you just need to keep them somewhere in the Pacific, in Japan, and that’s already a sticking point, so I don’t think that would be a realistic demand on the North Korean side to expect that the US would just vanish from the Pacific.