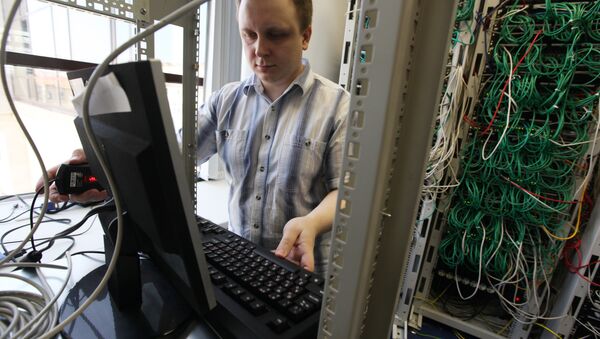 © RIA Novosti . Mikhail Fomichev
/
Go to the photo bank
Subscribe
On the sidelines of Russia's SPIEF in St. Petersburg, Sputnik spoke to the founder of Universa Blockchain Alexander Borodich about the challenges of Russia's digital transformation and prospects of country's "blockchainization".

Sputnik: What is your assessment of the current digital situation in Russia?

Alexander Borodich: I would say that Russia is taking the path of digital transformation and both entirely as a country, they’re switching all the processes from the old-school way of doing things to the digitalization and “blockchainization” if I can put the words like this. And both in Moscow and here in St. Petersburg there’re a lot of discussions on how these digital transformations should look like? What kinds of processes we should transform at first and to what extent? Because it goes without saying that the 4th technological revolution would be in digital or would be in blockchain. So not to miss this revolution we have to somehow lead this process.

Sputnik: I spoke to a person who’s working in the energy field and he was talking about the application of blockchain and energy distribution and power grids. And one of the things that he mentioned is technology right now is way ahead of legislation. Is it so? Do we see legislative problems in the way of this digital revolution?

Alexander Borodich: I wouldn’t say so. The blockchain itself is just the technology. It’s nothing more than an additional technological layer, which is connecting the previously not yet connected IT systems. So from this perspective we don’t need any additional legislation to keep it working. The only one part of application on top of the blockchain, which is related to cryptocurrencies, they need to be somehow regulated. But as for digitalization and tokenization processes in energy, in retail, we shouldn’t have any kind of additional legislation.

Sputnik: Your company, Universa, what place do you see? What kind of position is it hoping to achieve in this world and what kinds of projects are you working on right now?

For example, at Universa we’ve created halal money, that’s smart cash, which you simply can’t spend on alcohol and tobacco in the Islamic world. So also there’re ideas to work with governments, with central banks, to allow them to issue digital cash in their currency, not a cryptocurrency but centrally issued 100 percent controlled new digital cash, which is way cheaper than the paper money, which you can control from A to Z and it’s a more efficient way of doing things and our wallets would be our mobile wallets. All of us have smartphones currently.

Sputnik: Speaking of your projects abroad, the Russian media recently reported that you’re planning to start projects with your colleagues in China. How’s it going? Are there any new developments there?

Alexander Borodich: We have signed an agreement with 50 universities in China. Because China would like to lead the educational process in the blockchain world, to deliver as many engineers and blockchain developers as possible. And here I see the lack of energy and enthusiasm from the Russian side because if China can produce thousands of developers per year from such initiatives, thanks to us they would know how to use Universa blockchain as a blockchain platform, but here in Russia we see way less energy.

And we’re trying to push forward with several Russian universities, but it’s more than difficult to move it forward unfortunately for us. But we do whatever we can do to push the educational initiatives also here in Russia because we know for sure that there’re Russian developers, Russian blockchain engineers, they’re the best of the best in the world. I would say that 70 percent of blockchain developers are Russian-speaking developers from the Eastern world.

Sputnik: Does it mean that right now we would have to rely and in the future we’d have to rely on those who’ll be graduating in a few years from now, but not on attracting those who already immigrated to Silicon Valley, for example? Do we have hope of attracting them in our blockchain industry?

Alexander Borodich: I wouldn’t say so. I would think that Silicon Valley was created and was so famous due to the internet wave, the third wave of the technological revolution.

At this 4th digital wave of technology would lace upon the new way of “blockchainization” and we still don’t have courses, any educational programs. There’s no master course in blockchain yet. Those initiatives have just yet started. So those who will lead this revolution they have just started to learn stuff both in Russia and China and our goal is to help them to get to know things as soon as possible because the world will need thousands of blockchain developers pretty soon.

Sputnik: You mentioned that China has a little bit more interest in such projects than perhaps Russia at the moment. But here at the St. Petersburg forum you can get in touch with literally anyone from the minister of education to Skolkovo guys. And do you feel that they’re supporting your ideas?

Alexander Borodich: At least for me here at this forum we have a pretty tight schedule. Every single hour we have a new round of negotiations with the government, with the leaders of the largest Russian banks, logistic companies, energy companies. So the idea is to use the forum as a key driver to push our negotiations with all those companies forward and we’re hoping to have several contracts signed even here during those three days.

Views and opinions expressed in this article are those of Alexander Borodich and do not necessarily reflect those of Sputnik.

000000
Popular comments
I totally oppose paying with a telephone. This is the Orwellian nightmare where they will read you a bar-code on your forehead every time you go to the toilet. So, if I go to a wh0re house, I will be leaving my ID and a timestamp of where I was 4 years 5 months 3 days and 4 hours ago. Paper money means freedom and anonymity. By forcing us to use electronic digitals in every step of our lives we are being tracked and followed by a satellite even when we pull our pants down to take a sh!t.
CCCP_glory
26 May 2018, 09:55 GMT1
000000
Newsfeed
0
New firstOld first
loader
LIVE
Заголовок открываемого материала
Access to the chat has been blocked for violating the rules . You will be able to participate again through:∞. If you do not agree with the blocking, please use the feedback form
The discussion is closed. You can participate in the discussion within 24 hours after the publication of the article.
To participate in the discussion
log in or register
loader
Chats
Заголовок открываемого материала
Worldwide
InternationalEnglishEnglishMundoEspañolSpanish
Europe
DeutschlandDeutschGermanFranceFrançaisFrenchΕλλάδαΕλληνικάGreekItaliaItalianoItalianČeská republikaČeštinaCzechPolskaPolskiPolishСрбиjаСрпскиSerbianLatvijaLatviešuLatvianLietuvaLietuviųLithuanianMoldovaMoldoveneascăMoldavianБеларусьБеларускiBelarusian
Transcaucasia
ԱրմենիաՀայերենArmenianАҧсныАҧсышәалаAbkhazХуссар ИрыстонИронауОssetianსაქართველოქართულიGeorgianAzərbaycanАzərbaycancaAzerbaijani
Middle East
Sputnik عربيArabicArabicTürkiyeTürkçeTurkishSputnik ایرانPersianPersianSputnik افغانستانDariDari
Central Asia
ҚазақстанҚазақ тіліKazakhКыргызстанКыргызчаKyrgyzOʻzbekistonЎзбекчаUzbekТоҷикистонТоҷикӣTajik
East & Southeast Asia
Việt NamTiếng ViệtVietnamese日本日本語Japanese中国中文Chinese
South America
BrasilPortuguêsPortuguese
NewsfeedBreaking
17:24 GMTWhitehall Union Claims Victory After Court Dismisses its Case Against Johnson and Patel
17:14 GMTPope Francis Stumbles on Airstair as He Boards Plane in Greece
17:02 GMTTrump’s Social Media Listing Vehicle Says Under Inquiry From US Securities Investigators
16:47 GMTRussia, Egypt Start Naval Phase of 'Bridge of Friendship-2021' Drills in Mediterranean
16:40 GMTUS Reportedly Mulls Cutting Russia Off SWIFT, Sanctioning Energy Producers & 'Putin's Inner Circle'
16:37 GMTFinland’s PM Parties at Nightclub Until 4am After Contact With COVID-Positive Official
16:14 GMTSecond Week of Ghislaine Maxwell Sex Scandal Trial Kicks Off
15:56 GMTBoost for Britain! Is the UK’s COVID-19 Third Jab Campaign Saving Lives?
15:55 GMTWestminster Preparing 10-Year War on Drugs in Attempt to Defeat County Line Gangs
15:44 GMTIsrael Will Reportedly Push US to Strike Iranian Facility Amid Lack of Progress in Vienna Talks
15:41 GMTAmerica Unveils First-Ever Strategy to Battle Corruption at Home and Abroad
15:30 GMTChina May Build Military Base in Equatorial Guinea Amid Beijing’s Tensions With Washington
15:15 GMTKremlin: Putin Will Listen to Biden's Proposals on Ukraine 'With Great Interest'
15:15 GMTNYC to Use 'Preemptive Strike' Against Omicron With Vaccine Mandate for all Businesses, Mayor Says
15:08 GMT3,000 Security Officers Guard India's Mathura as Hindu Group Threatens to Install Idol in Mosque
14:59 GMTAmid Rumours of US Boycott of Beijing Olympics, How Could the Move Affect the Games?
14:52 GMTUK Policing Minister Not Surprised Over Reports of Drug Use in Parliament Building
14:45 GMTLabour Unions Protest in Brussels Against Low Wages, Expensive Electricity - Photos
14:26 GMTSpanish Court Rules Employee Can be Fired for Job Abandonment During Pandemic - Reports
14:18 GMTAnger and Shock After Intruders Vomit and Urinate at Site of Manchester Arena Bombing Memorial