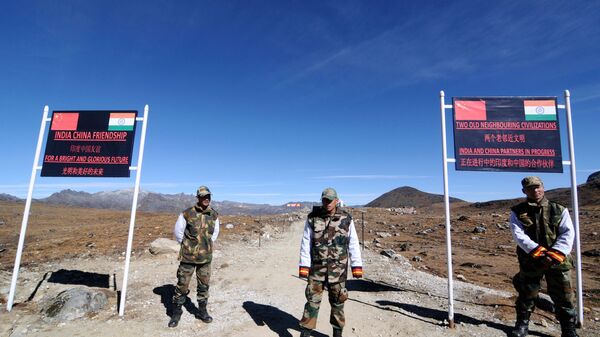 © AFP 2023 / BIJU BORO
Subscribe
International
India
Africa
The South China Morning Post, in an article on Sunday, claimed that China is rapidly building infrastructure along the de-facto border with India in order to fully assert its claims over Arunachal Pradesh (recognized as South Tibet by Beijing) by turning it into another South China Sea like scenario.

New Delhi (Sputnik) — Beijing on Monday defended its large-scale mining operations in the mineral-rich Lhunze county of Tibet, claiming that the mining area is a part of China and that it enjoys full sovereignty to conduct such geological activities there. The mining activity has triggered concerns in New Delhi, as the area is very close to the Line of Actual Control (LAC) — the de facto border between India and China.

'Not So Invisible After All': Su-30 Manages to Detect Top Chinese Stealth Jet
The activity was brought to light by the Hong Kong-based South China Morning Post which reported on Sunday that the mining operations along with large-scale infrastructure project "is part of a determined endeavour by Beijing to regain full control of South Tibet, Arunachal Pradesh — currently an Indian state as large as Austria with original forests, fertile farmland and rich natural resources."

"China conducts regular geological and scientific research on its own territory. It is completely within China's sovereignty. China always attaches importance to protecting ecological environment. We hope relevant media can refrain from hyping up based on a groundless report," Lu Kang, Chinese Foreign Ministry spokesman said during a media briefing in Beijing on Monday when asked about the report.

An Indian analyst sees it as a part of psychological warfare by China.

"Some of the narrative emanating from that side is part of the psychological warfare to make us believe that China is too strong to resist and getting hold of Arunachal Pradesh by it is a matter of time. That this narrative has no takers in India is a different matter," Brigadier Rumel Dahiya (retired), a national security expert, told Sputnik.

China May Grab Hold of All Asia-Pacific With Its 'DebtBook Diplomacy' - Report
Dahiya is of the opinion that currently, it would not be apt for India to object to the Chinese mining unless they are conducted near rivers that flow from Tibet to India, causing an adverse environmental impact.

"In principle, undertaking mining so close to the border does create misgivings on your side but it cannot be objected to unless there is an environmental impact on our side," Dahiya added.

The development comes against the backdrop of India and China striving to reset ties after a prolonged bitterness in relations in wake of the military standoff at the Doklam plateau last summer.

In April, the Indian Prime Minister Narendra Modi traveled to Wuhan for an informal summit with Chinese president Xi Jinping.

Following Wuhan Summit, it was reported in the Indian media that the government had asked the armed forces to avoid aggressive patrolling along the LAC and that "there should be no bodily contact" between soldiers.

"The practical side is that an economic activity at a large scale so close to the border will mean demographic change, infrastructure development (that can also be used for military purposes if planned), and presence of security apparatus. The antidote to all these is a greater focus on surveillance and defense preparedness," Dahiya concluded.

The views and opinions expressed by Brigadier Rumel Dahiya (retired) in this article are those of the speaker and do not necessarily reflect the position of Sputnik.