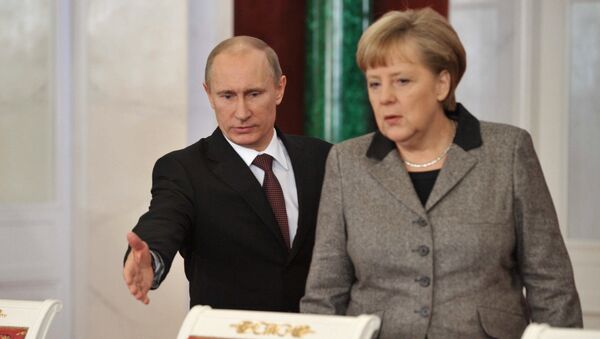 German Chancellor Angela Merkel has started an official visit to Russia by meeting with Russian President Vladimir Putin in the Russian city of Sochi. Mani international issues are on the agenda of the bilateral talks.

The two leaders discussed the situation around the Iranian nuclear deal, the Ukrainian and Syrian crises.

Vladimir Putin and Angela Merkel exchanged opinions on the situation which unfolded regarding the Joint Comprehensive Plan of Action on resolving the Iranian nuclear program after the unilateral US exit.

According to German Chancellor Angela Merkel, the deal on the Iranian nuclear program is not perfect, but it is better than no agreement at all.

"We spoke about the difficult situation amid the US withdrawal from the Iranian nuclear deal. Germany, the United Kingdom, France and all our colleagues in the European Union are supporting this agreement and we are going to continue to abide by it in the future," Merkel said.

She pointed out that the European Union wanted Iran to remain a part of the deal.

"The Russian side is ready to work with its German colleagues on a mutually beneficial basis taking in the account the interests of the people of our countries," president Putin said after talks with German Chancellor Angela Merkel.

Berlin Urges to Adhere to Media Freedom Amid Arrest of RIA Novosti Ukraine Head
The latest crisis in Ukraine, where a head of RIA Novosti Ukraine portal Kirill Vyshinsky was detained. Putin described the whole situation as "unprecedented", adding that the journalist was charged by Kiev with high treason for "performing his professional duties".

"As for the journalist [Vyshinsky], I will certainly discuss my current trip with the Ukrainian president, I will mention this case. As I said, Russian journalists who are here are arrested and can't do their work, which also causes our concern," said Merkel.

Russian president Vladimir Putin said Friday he and German Chancellor Angela Merkel had agreed at talks in Sochi on the need for a political settlement of the Syrian conflict, including through Astana and Geneva talks.

"We discussed the problem of the Syrian crisis as well, we stated that it was necessary to make joint contribution to the process of the political settlement via Geneva and Astana platforms as well as to the stabilization of the situation on the ground, delivery of the humanitarian aid to the Syrian people," Putin added.

According to the Russian president, European countries should help Syria so its economy is restored as quickly as possible so that Syrian nationals could return home.

"We note Germany's intention to seriously take part in restoring this country's social and economic infrastructure. It is important that any help is provided is coordinated with the legal authorities," Putin said at a press conference.