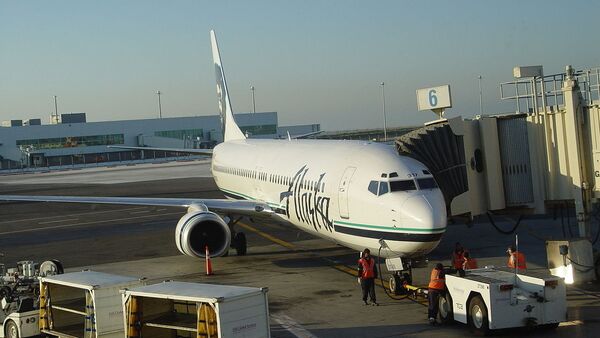 A passenger was tackled and detained on an Alaska Airlines flight from Seattle to Anchorage, Alaska, on Monday after running naked up and down the aisles of the plane 20 minutes before landing.

Former Alaska Senator Johnny Ellis, who was on the plane, tweeted, "WOW. On my flt from SEA 2 ANC, a completely naked man ran from front of plane to back, yelling and waving."

According to Ellis, when the plane landed, police boarded to take away the man, who was suspected of having taken drugs. However, Ellis also notes that the man may have been having a psychotic episode because "some said [that one of the guys] who chased and tackled him was actually his father."

Yahoo writer Daniel Roberts, who was also on the flight, described the incident as "very scary at first" in a Monday tweet, but noted that once the guy was restrained, it was all laughs.

In a statement Monday night, Alaska Airlines spokeswoman Bobbie Egan confirmed that before the plane descended to Anchorage, a male passenger was detained. Although she did not specify what led to the incident, she stated that the unidentified male was removed by police when the plane reached the gate and was then taken to a local hospital.