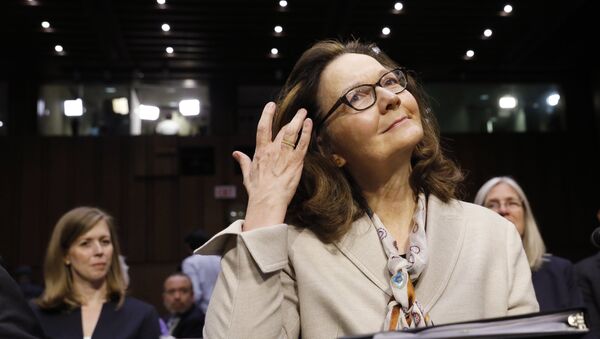 ​"There were quite a number of us; in fact I'd say about two dozen of us who were there protesting the hearing of Gina Haspel and before the hearing even started, it was clear the police wanted to get us out of there," Benjamin told Radio Sputnik's Loud & Clear hosts John Kiriakou and Brian Becker.

"They were already there in large numbers with their handcuffs. Normally in a hearing, we are allowed to hold up signs until the hearing begins and talk, because that's just the way," Benjamin said. "We were told by an officer: ‘Yes, you can do all that before the gavel goes down and the hearing begins.' Instead, a new officer came in, said he was in charge, and had us arrested for holding signs and saying ‘Don't reward torturers.' So, it was clear they wanted to get us out of there and try to minimize any disruption during the confirmation hearing."

McGovern, who served in the CIA for 29 years and was a member of the Senior Intelligence Service, the highest-ranking cadre of intelligence officers that exists in the agency, was pulled out of the hearings after trying to press Haspel on her oversight of torture at a CIA blacksite in Thailand.

​Though Benjamin and a number of other demonstrators were arrested, she noted that observers wanted to listen to McGovern. "I was in jail so I can't really tell you, but I have seen lots of videos and people in general were really — they were hanging on every word, because here he was in a formal jacket, obviously an elderly man, and very articulate. Most of the people in that room, I think, were very sympathetic and wanted to hear him out. It would have been so easy to give him all of like, 30 seconds, and say, ‘Sir, if you don't come with us you'll be arrested."

According to Benjamin, other anti-torture advocates were present at the hearing as well. "There was one person who got up and said ‘What is love if we allow torture?' It was the words of Sister Dianna Ortiz, who was tortured as a nun working in Central America. She was actually sitting in the back of the room," Benjamin said.

"There was a woman, also, who got up and said, ‘Bloody Gina.' She was, I think, quoting John Kiriakou at that point. So there were several disruptions," Benjamin noted. Kiriakou, another former CIA officer who now hosts Loud & Clear, spent two years in prison after exposing the CIA's waterboarding torture program.

"I think there is such a parallel between the way people were treated at the hearing yesterday and the kind of ‘I'm just obeying orders' attitude that represents Gina Haspel and that kind of thinking," Benjamin said, noting the irony of Haspel's possible promotion in light of both Kiriakou and McGovern being jailed for protesting the torture she was "integral to," according to Kiriakou.