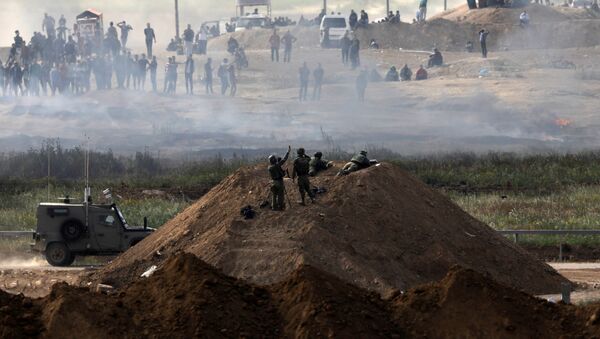 Palestinians make their demand to return to homes or places their forebears fled or were forced out of a prerequisite for any peace agreement with the Jewish state.

On Wednesday, the Hamas leader in Gaza, Yahya Sinwar, vowed a “decisive” protest on the Israeli border next week as part of an ongoing campaign to end Israel’s decade-old blockade of the Palestinian enclave.

“We can’t stop these protests. We are supporting, even leading, them,” he said. The protests will be “like a tiger running in all directions,” Sinwar warned.

A mass rally is scheduled there for Monday where demonstrators will demand an end to the Israeli closure of Gaza and their right to return to the homes and sites Palestinians were forced to abandon during Israel’s war for independence in 1948.

'State of War': Israel Argues Human Rights Law Doesn't Apply to Gaza Protests
The Palestinians demand this right not only for the tens of hundreds of refugees who are still alive, but also for their descendants, who number in the millions.

Israel rejects the notion of a mass “right of return” arguing that an influx of millions of Palestinians would seal the end of the Jewish nation-state.

Monday’s Nakba Day rally, when Palestinians will be marking 70 years of displacement, caps six weeks of protests, which were further fueled by President Donald Trump’s decision to move the US embassy to Jerusalem.

Israel justifies its ongoing blockade of Gaza Israel by the need to prevent Hamas attacks at the border and attempts to breach it.

According to Gazan health officials, 48 Palestinians have been killed and hundreds have been wounded from gunfire since protests and clashes erupted along the Gaza border on March 30.

Israel defends its right to open fire at demonstrators arguing that the ongoing protests taking place near the Gaza fence amount to an “act of war.”