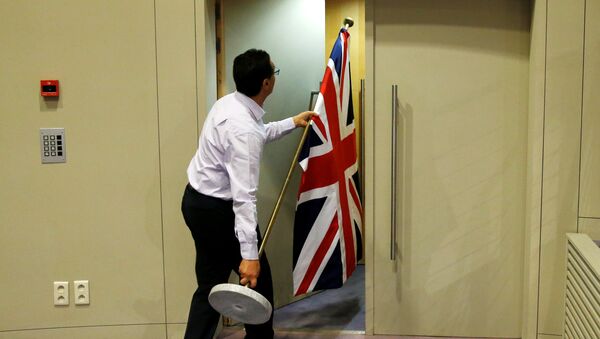 The Brexit strategy of both Theresa May and Jeremy Corbyn has been blown apart in the last 24 hours. MPs will now have a vote on remaining in the European Economic Area – effectively a vote on the single market – after a shock defeat for the government in the Lords.

Sputnik spoke to Bill Etheridge, UKIP's Member of the European Parliament for more insights into the issue.

Sputnik: How angry are you following these latest developments? Was it to be expected?

Bill Etheridge: It’s absolutely appalling whilst it was probably supposed to have been expected. The House of Lords is more appropriately the ‘House of Cronies’ of establishment figures who got their titles for being good little boys and girls, doing what the establishment asked them to do, they’re always going to vote the way the establishment wanted. By the establishment I don’t mean the politicians, I mean the powers that be that actually run our country.

I’m totally disgusted that in this day, 2018, a vote of the people is being reserved and overturned by the House of Lords. The very thought of it is absolutely abhorrent. I’ve long been a proponent saying we should have an elected second chamber, and if people don’t see it after this then maybe people want to be subservient, but I don’t.

Sputnik: How significant in your eye is this that an unelected body in British parliament has essentially blocked ongoing Brexit?

Bill Etheridge: It gives light to the fact that we are supposed to be a democracy. There is clearly no freedom. There has never been in history, a larger vote of the people for anything than this — never in history.

This is a very dangerous time for British democracy because frankly even someone like me, who has dedicated much of his life trying to change things through democratic means is seeing this and saying ‘hang on, what the hell’s going on?!’ Is there actually any point in democracy, if and when you win a crushing and resounding victory, it’s not even accepted.

Sputnik: Labour MP Chuka Umunna, co-chair of the pro-European Commons committee with Conservative MP Anna Soubry, said the leadership would now have to come off the fence and make it clear where it stood. Is the British government and the opposition Labour party confused about what Brexit means?

Bill Etheridge: No they’re not confused. They know exactly what it means they just don’t want to do it. The problem we have, we had a seismic event in our referendum victory but what didn’t have was a change of government to go with it. So this result was handed down to people who would go out of their way to water it down and stop it happening.

Going a step further they now are being forced by people like Chuka Umunna and Anna Soubry, who are in my opinion effectively traitors to the British people, and they are being forced into a position now where their vote means nothing. I think it’s very very dangerous, it’s horrendous and it really does question the concept of British democracy. It is beyond appalling.

The views and opinions expressed by Bill Etheridge are those of the analyst and do not necessarily reflect those of Sputnik.