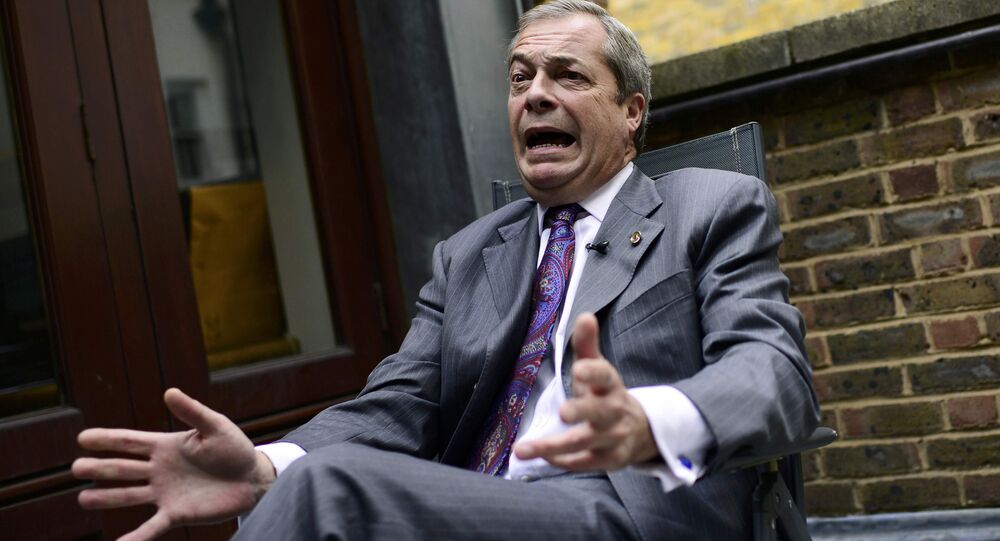 Nigel Farage, former leader of the UK Independence party (UKIP) that has very little parliamentary representation yet commands much media attention, has accused the British government of "backsliding" on its Brexit agreement.

The accusation follows the comment in the House of Commons by Britain's Chancellor Philip Hammond that the government would strike a "transitional deal" over Brexit by the time negotiations around Article 50 closes.

© REUTERS / Vincent Kessler
Farage Criticizes Conservatives for Lack of Cooperation on Brexit Vote
Appearing before a Commons Treasury Select Committee, Philip Hammond told MPs that "having a longer period" in which to complete Brexit negotiations with the EU would be "generally helpful."

However, it seems Mr. Hammond's neither hard, nor soft but "transitional" Brexit approach has incensed Nigel Farage, a staunch Leave campaigner.

Mr. Farage has accused the Chancellor of trying to "delay" UK's exit from the EU which is "opposing the will of the people."

"If he had said, look, we're absolutely committed to fulfilling the will of the people, we'll be leaving the Union, leaving the customs union and the single market — however, we may need a short transition before we get there. Had I heard that I'd be listening. What I'm getting from people like him is backsliding."

Mr. Farage told the radio audience that he suspected that the UK would "fudge" leaving the EU "and give us a Norwegian-style deal."

"If you take us down a Norwegian-style route by arguing that we have to do this for economic stability…if they do those things, then they underestimate, massively, just how angry British voters are going to be," Nigel Farage said.

Out campaigning in Sleaford asking people to send the Government a message and get on with Brexit. pic.twitter.com/Xieq7IAAiB

Mr. Farage has vowed to return to British politics and continue the fight for Britain's divorce from the European Union if the Conservative party continue to "backslide" away from Brexit.