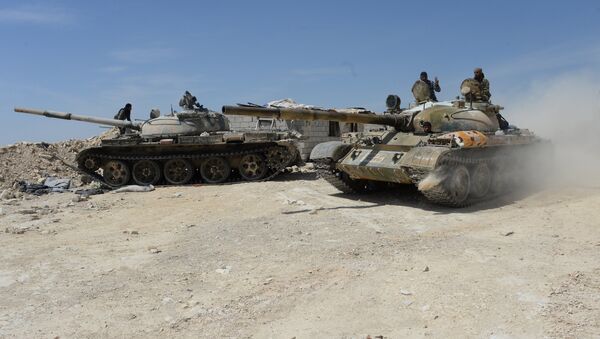 The Syrian army is currently engaged in flushing out the remaining jihadist militants holed up in Damascus’ neighborhoods and suburbs.

Units of Syrian government forces advanced into the city of Al Hajar Al Aswad, located to the south of Damascus on Thursday, dividing the Daesh terrorist militants into two isolated groups.

According to Syria's official SANA news agency, government units moving from the south joined forces with army units advancing from Damascus effectively carving up the militant-held city into two parts.

The government troops also severed the militants’ supply chains, and continued their advance toward the nearby Yarmouk refugee camp.

Despite heavy air and artillery support, intense fighting continues in the area with the urban environment and underground tunnels slowing down the army’s advance.

A part of the Yarmouk refugee camp and surrounding villages are the terrorists’ last remaining strongholds in the entire Damascus suburb.

Military operations are expected to continue until the Syrian army regains control over southern Damascus, securing the neighborhood, which is being shelled by terrorists.