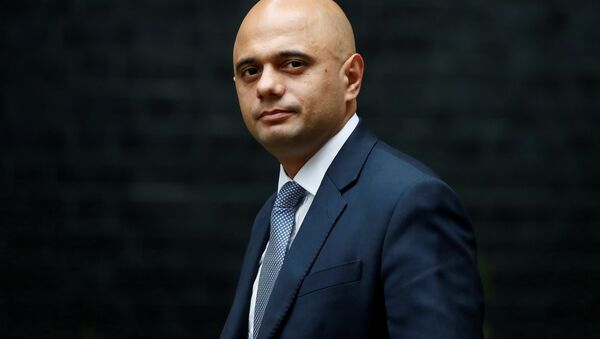 Sajid Javid was regarded to be the main nominee for the UK Home Secretary's post after Amber Rudd resigned dramatically amid a migrant scandal.

Shortly after his appointment, Javid stated that as the UK interior minister he would make sure that UK immigration policy is fair and treats people with respect.

"The most urgent task I have is to help those British citizens, that came from the Caribbean, the so-called Windrush generation, and make sure that they are all treated with the decency and the fairness that they deserve," he told reporters.

Earlier in the day, Prime Minister Theresa May's Downing Street office announced in a statement that Javid was named as the UK's new Home Secretary. Previously he held the post of Britain's Communities Minister.

"The Queen has been pleased to approve the appointment of the Rt Hon Sajid Javid MP as Secretary of State for the Home Department," the statement reads.

May's spokesperson called Javid "one of the most experienced ministers around the cabinet table" and noted that he had shown "drive, ambition and determination to get to grips with difficult subjects," which the newly appointed minister would need in his job.

Lawmaker James Brokenshire will replace Javid as Secretary of State for Housing, Communities and Local Government, the UK prime minister's office said in another tweet.

She was heavily criticized after a leaked internal Home Office memo revealed that the UK did use targets on migrant deportation, despite Rudd telling the Parliament that such targets do not exist.

Very sad that Amber is leaving Government. A huge talent that will no doubt be back in Cabinet soon, helping to strengthen our great nation

Social media users immediately took to Twitter to express their views on the new cabinet member.