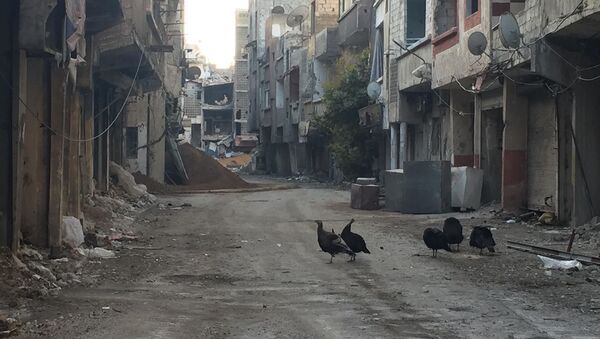 "Without any doubt, Russia's actions are aimed at disrupting the US plan… to achieve its own strategic goal [in Syria]," he stressed.

The general secretary also added that Russia was hindering attempts of "a state from another continent" to finance extremists.

"The obligation of Russia… to cooperate in the fight against international terrorism was indeed based on preventing destabilizing attempts by a state from another continent to finance groups that eventually become terrorist ones," Pascualino Angiolillo said.

Syria has been in a state of civil war since 2011, with government forces fighting against numerous opposition groups and terrorist organizations. In September 2015, Russia launched aerial campaigns against terrorists in Syria at the request of Syrian President Bashar Assad.

READ MORE: Even if Saudi Troops Arrive, US Won't Pull Out of Syria — Retired General

On December 11, Russian President Vladimir Putin ordered to begin the withdrawal of a significant part of Russian troops from the country only several days after he announced a "complete" victory in Syria over the Daesh* terrorist group, which is banned in Russia. He said militants were defeated on both banks of the Euphrates River.

Russia, along with Turkey and Iran, is one of the guarantor states of the Syrian ceasefire. Moscow has also been assisting Damascus by providing humanitarian aid to the residents of the crisis-torn country.