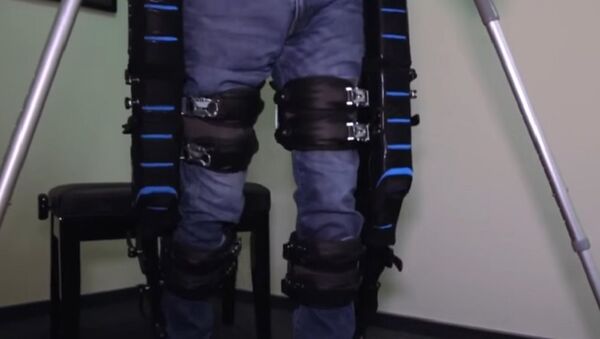 The Russian company ExoAtlet has presented its own model of exoskeleton, created for people who have problems with their locomotor system at the international Skolkovo Robotics forum in Moscow. ExoAtlet's co-founder Ekaterina Bereziy told Sputnik about their new product and its prospects on the Japanese market.

The exoskeleton presented by the Russian ExoAtlet company is its second model, which is now equipped with electronic muscle stimulators that speed up muscle and synapse recovery.

This new model can hold a 100 kg man and can be tweaked for each patient personally, depending on how severely his locomotor system was damaged. Over time, as the patient regains health, it will support him or her less and less until a full recovery is achieved. Preliminary tests show impressive results — 3 out of 4 patients could walk on their own 10 days after beginning to use the exoskeleton.

"It pleases the eye to see a 65-year-old "young boy" […] asking his relatives to bring him a ball and saying 'I can now play football!' You see him going outside by himself and his eyes are glowing. It's like the man has received a second life," Ekaterina Bereziy, co-founder of ExoAtlet, said.

She shared ExoAtlet's plans to promote their product on both European and Japanese markets. They plan to open their branch in Japan this year.

"The Japanese market is key for our company. There we will be compared to the best of the best. Today Japan is the only country that has adopted standards of medical rehabilitation with the use of exoskeletons. […] That is why the Japanese market is huge and solid. Competition on such markets is pure joy," Ekaterina Bereziy said.

She believes that the system that was developed in Japan could become an extraordinary example for the Russian healthcare system. Meanwhile, Russia has already started taking its first steps in this new sphere. Russian President Vladimir Putin ordered the government on April 12, 2018 to develop a law, implementing the use of exoskeletons in the rehabilitation of patients.