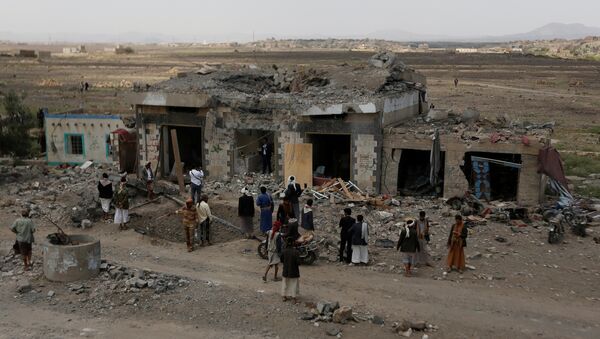 Saudi Arabia has stepped up its air campaign in Yemen, killing at least 78 Yemenis since Friday, worsening the situation for the country which is already experiencing the greatest humanitarian crisis in modern times. Medea Benjamin, co-founder of the anti-war group Code Pink, joins Loud & Clear on Radio Sputnik to talk about the raids.

Saudi Arabia's air force bombed a wedding party in Yemen Sunday, killing at least 20 people and injuring 45. In another strike the same day, a Houthi leader was killed along with at least 32 others, while 55 were injured. Sunday's devastation followed two other air raids on Friday and Saturday.

Most of the casualties from the air strike on the wedding party in Yemen's Bani Qais district in Hajjah province were women and children, including the bride. The groom had "shrapnel scattered all over his body," Benjamin said, while some of the children were left with "missing limbs and eyes."

Saleh al-Sammad, the acting president in Houthi territory and the head of the group's Supreme Political Council, was among the 32 others killed in the other major attack that day.

The council called for three days of mourning for al-Sammad's death and named Mahdi Mohammed Mashat as their new leader.

"You'd think that everybody who met with the Crown Prince Mohammed bin Salman from Saudi Arabia when he was doing his three-week tour of all the elites in the United States would now be regretting having gone to the gala dinners with him and may be doing something even more, like asking him why are they killing people at wedding parties or residential neighborhoods or a commuter bus like they did this weekend," Benjamin told Loud & Clear hosts Brian Becker and John Kiriakou. "But I don't see much of an outcry. In fact, I don't see any outcry from any of the people that he met with."

A family of five, three of whom were children, was killed in an air strike on Saturday in Yemen's Hudaydah province, and 20 more were reportedly killed while traveling in civilian transport vehicles on Friday in the Taiz province by Saudi strikes.

"Let's remember that the targeting of funerals and weddings is something that started before the Saudis got involved — with US drone strikes," Benjamin told Loud & Clear. "In fact, in 2013, a US drone strike hit a wedding party. In 2015 they hit another wedding party — that was once the Saudis got involved. But the US hit funerals and weddings, and then helping the Saudis with their targeting, are doing the same thing."

Benjamin said that she went to Yemen after that attack and heard the same laments from all the locals. "They all said the same thing: ‘The US refuses to apologize for what it did and then tries to buy us off with some money that we have to fight with them about, and they haggle what's the price of our loved ones,'" Benjamin recalled. About a year after the attack, the Americans had "given about almost a million dollars in compensation to the different parties, but it made people on the ground even madder because of the way they did it."

"It was really when the October 2016 funeral that was hit by the Saudi bombings and killed 140 people, that was when [former US President Barack] Obama started considering whether we should pull back a little bit in our support for the Saudis," Benjamin said. "But since Trump came in, it's been all out for the Saudis."

The Saudis imposed a "weekend of mayhem" upon the people of Yemen, Benjamin stressed, calling on Congress to stand up to their Saudi allies.

Saudi Arabia has been on the offensive in Yemen since Houthi rebels expelled Abdu Rabbu Mansour Hadi, the former US-backed president of the country, from the capital Sanaa in 2011.

Since then, the situation in Yemen has become the worst man-made humanitarian crisis "of our time," according to the United Nations. Deadly diseases like cholera have spread more rapidly than ever in modern times in Yemen, with more than 815,000 cases suspected by the World Health Organization and a quarter of them believed to involve children. Famine has also emerged as a massive problem for the country as rebels are unable to import food due to the Saudi coalition's blockade.