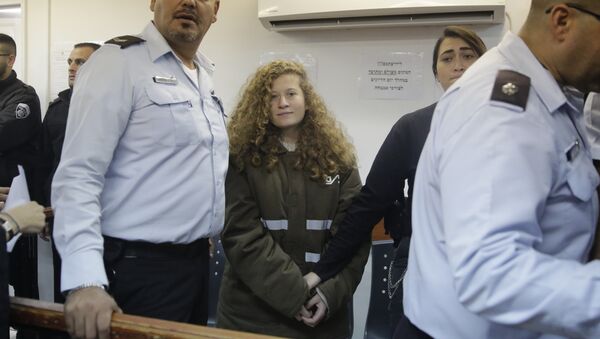 An Israeli lawmaker said that a young Palestinian girl who was convicted for slapping and kicking an Israeli soldier should’ve been shot rather than sent to prison.

Bezalel Smotrich, deputy speaker in the Israeli parliament, has declared that Ahed Tamimi, a Palestinian teenage girl who was sentenced to 8 months in jail for slapping an Israeli soldier, should’ve been shot instead, Haaretz reports.

"In my opinion, she should have gotten a bullet, at least in the kneecap," he wrote. "That would have put her under house arrest for the rest of her life."

Israeli lawmaker Bezalel Smotrich tweets that “[Ahed Tamimi] should have gotten a bullet, at least in the kneecap. That would have put her under house arrest for the rest of her life.”

He is a member of the extreme right-wing nationalist and pro-settler Habayit Hayehudi party. https://t.co/74Pe1cDMg2

This development did not sit well with many Twitter users, who were quick to voice their outrage.

If Israel were a civilized country, which it is not, Smotrich would be removed from office & ostracized. He’s not the first to issue a call to violence against #AhedTamimi. One even suggested she be raped. It is a disgrace.

A monster!Crippling 16 yr old for life is his idea of justice. The world is watching Israel now, I've heard criticism from all walks of life where I live in Aus which is very recent, old ladies at the local pool are appalled. 'Bezalel Smotrich a thug & inciter' not fit for parlt. https://t.co/edrBPt4zLl

Smotrich, Bennett, Lieberman… this governing coalition is filled with far right radicals that are an embarrassment to Israel. They are the fuel for BDS. https://t.co/R1hM7tHva9

​Some however argued that Smotrich’s stance hardly represents the opinion of the majority of Israeli citizens.

Yep, but context is everything. "Deputy Speaker" makes it seem that he represents a consensus in Isreal while in reality, Smotrich's faction won 2 seats (out of 120) in the last election. He was placed on the ticket to get the voters who are furthest to the Right.

Bezalel Smotrich’s stature is considerably inflated if we call him “Deputy Speaker of Israel’s parliament,” of which he is one of numerous appointed in coalition horse-trading. This dude vies for title of national clown with retired pimp Oren Hazan. https://t.co/NXgDUriWNr

​Ahed Tamimi was arrested in December during a night raid by Israeli forces, a few days after she slapped and kicked a pair of Israeli soldiers who were patrolling the area near her residence in Nabi Saleh, in the West Bank near Ramallah.

Tamimi originally faced up to three years in prison if convicted of the 12 counts against her, including assault, stone-throwing, incitement of violence and making threats, but she eventually accepted a plea bargain which reduced her sentence to 8 months.