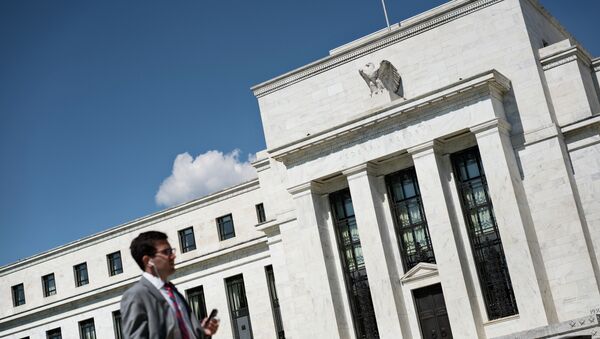 © AFP 2021 / BRENDAN SMIALOWSKI
Subscribe
Recent signals of a looming US recession don't matter much, the Federal Reserve says, as the current macroeconomic conditions are suggesting that across-the-board economic expansion will continue, while policy turmoil is stirring confusion in the financial markets.

Kristian Rouz — At least two influential Federal Reserve policymakers say there's no chance of a recession in the coming two years, adding that the robust pace of economic acceleration will continue in the near-to-medium-term. This comes despite the mounting concerns of the flattening yield curve, which market participants see as a sign of an economic downturn.

The discrepancy between the profitability of short-term and long-term US Treasury bonds has narrowed over the past several months, suggesting that the so-called yield curve might invert, eventually prompting investors to curb exposure to short-term investments — which constitutes the backbone of economic expansion.

READ MORE: Golden Shower: Why Countries Pull Out Their Bullion From the US

However, Fed Vice Chair for Supervision Randal Quarles says a recession will be avoided.

"I think the flattening of the yield curve we are seeing now is more a result of expected lags in the adjustment of the longer-term rates once shorter-term rates start to rise," Quarles said. "If that is what is driving things going forward I don't think it is as likely that the inversion of the yield curve is… sort of an indicator of a recession to come."

Regulatory Prioritizing, Subsidies Behind UK's Renewable Energy Boom
His remarks — made at the Bretton Woods conference earlier this week — suggest the Fed's portfolio cuts, coupled with the ongoing tightening of monetary policy conditions, have stirred extended uncertainty amongst investors of how to react to the tectonic shifts in overall US economic policy.

The Trump administration has taken major steps to ending the debt-driven demand-side model of economic growth, which has been dominant over the past three decades. While investors are still processing the information and adjusting to the rapidly changing policy environment, many of them prefer to be on the safe side of things, allocating capital into safe-haven assets, including longer-term bonds.

Despite the fact that an inverted yield curve was followed by a recession at least 17 times over the past several decades, this time it could be different, as this is the first time in US economic history when the economy is exiting a prolonged period of unconventional stimulus policies through radical policies.

These include a worrisome readjustment in foreign trade, massive tax cuts and infrastructure investment, as well as a pivot toward Main Street small-business expansion.

"I'm not viewing the current flattening of the yield curve as a particular signal towards a pending recession," Quarles said.

Charles Evans, President of the Federal Reserve Bank of Chicago, echoed Quarles' remarks, saying a flatter yield curve isn't much a sign of anything at this point.

"The Yield curve is not nearly as much of a concern as I might have pointed to a couple of months ago," Evans said.

This comes after Fed policymakers said the economy is gaining momentum amid increased investment in the non-financial sector, as well as an overall higher activity in the Main Street economy. Financial tools at this point are gradually losing their prominence, as opposed to the model of economic growth of the past 10 years.

US Investors Extend Oil Bets as Trump Criticizes OPEC
This comes as many US private-sector enterprises are increasingly reluctant to raise capital through bond offerings, rather opting to rely on their improving operation revenues. Subsequently, bond markets are eyeing a lower influx of capital their way.

Back in March, the Federal Reserve said at its meeting in Washington the narrowing yield curve is nothing extraordinary,  given the current circumstances and patterns of economic growth.

Policymakers "generally agreed that the current degree of flatness of the yield curve was not unusual by historical standards," according to the minutes from the Fed's March meeting.

While a recession in the broader economy is unlikely, bond markets — and, possibly stocks as well — might feel a bit of a squeeze in the coming two-years. This as US financial assets are generally viewed as overpriced, meaning less investors would be willing to enter the market.