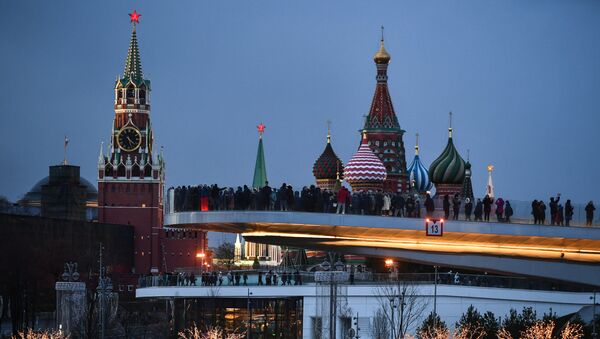 © Sputnik / Maksim Blinov
/
Go to the photo bank
Subscribe
US Ambassador to the UN Nikki Haley has told CBS that Washington was preparing new sanctions on Russia over Moscow's support of the Syrian government, adding that the measures would be announced on Monday, April 16.

Russia is convinced that there are a number of sanctions and an undisguised attempt to engage in unfair competition, hiding behind some other considerations, attempts to squeeze out competitors, in this case, Russian companies, from international markets, Russian Presidential Spokesperson, Dmitry Peskov said, commenting on the US sanctions.

"Of course, this cannot have any relation and cannot be accepted in any way by considerations related to the situation in Syria, or any other country in the world. There is nothing like this, I would say, international economic raiding," Peskov told reporters.

According to Peskov, Russian authorities are continuing to work to ensure the stability of the economic situation in connection with the imposition of US sanctions.

"Any of our actions in this case [within the framework of the response to anti-Russian sanctions] will be carried out solely on the basis of our own interests, the interests of the Russian Federation," Dmitry Peskov stated.

"We have always told the Americans that their attempts to change something in the line we are pursuing by imposing or threatening sanctions are doomed to failure. But so far the experience of living in this reality for many years has taught our American colleagues nothing," Ryabkov told reporters.

Moscow Rejects to Comment on Reports About New US Sanctions
The United States has already imposed anti-Russian restrictions on several occasions, including recent sanctions against Moscow over its alleged global destabilization efforts. Among the individuals and entities affected by the US actions were Russian businessmen and companies controlled by them, as well as a number of high-ranking officials.

Last week, the heads of the factions in the State Duma, the lower house of Russian parliament, together with speaker Vyacheslav Volodin introduced a draft law on the potential response to US sanctions and anti-Russian policies. The document stipulates a ban on imports of US agricultural, alcoholic, tobacco products and medical drugs. It also implies the suspension of cooperation between Russia and the United States in nuclear energy, aircraft manufacturing and supplies of rocket engines.

The Kremlin said it still hopes for a dialogue with Washington despite the US-led strikes on Syria last week.

"We hope that, when our American colleagues solve their internal issues, some kind of communication will begin despite all the damage to (our) bilateral relations currently imposed by Washington," Dmitry Peskov said.

Russia considers the recent attack on Syria to be aggression and violation of international law, according to the Kremlin spokesman.

"On Saturday and Sunday, we all witnessed another violation of international law, regular aggression by a number of countries against the sovereign Syrian Arab Republic. You know Russia's position, which was clearly and unequivocally formulated in the statement by the head of the Russian state," Peskov told reporters.

Turkey-Russia Ties Too Strong to be Broken by French President Macron - Ankara
France, the US and the UK launched missile strikes against regime targets on April 14 in Syria, following an alleged chemical attack blamed by the West on the Damascus regime that reportedly killed dozens.

Russian President Vladimir Putin emphasized that the strikes had been carried out in violation of norms of the international law.

No Discussions of Possible Putin-Trump Summit

There are no discussions of a possible summit between Russian President Vladimir Putin and his US counterpart Donald Trump, Kremlin hopes that Moscow and Washington will resume communication despite all the damage caused to bilateral relations, Kremlin spokesman Dmitry Peskov said.

000000
Popular comments
"our American colleagues" a wrong word . They never will be collegues to any one. Imagine saddam, gaddafi, assad- they too thaught they are collegues of US. Peskov must be in his dream world and Putin is the director.

kasivasantha
16 April 2018, 15:32 GMT3
000000
All type of sanctions not issued by the UNSC are illegal, so what Russia said that these sanctions are illegal but not the previous ones. In the back of Putin mind, he though Russian will be accepted by the mafia run by the USA and its puppets allies. He may thoughts under his capitalist system that the USA will accept Russian in the mafia body. Now Russia is totally aware that this will be not the case while Putin is in government which the same that Assad. The USA does not want in its mafia an unreliable partner that can compete with the USA on the wealth and resources of the world. This is an ugly pseudo divorce between the USA and Russian. Perhaps Russia will be treated better if Russia reverse to its communistic pass.