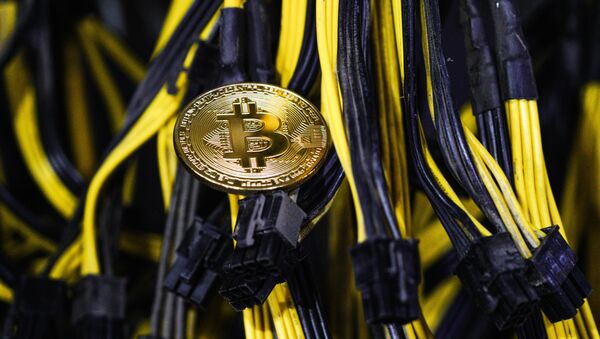 © Sputnik / Vladimir Astapkovich
/
Go to the photo bank
Subscribe
Bitcoin is going up - yes, the world’s most volatile currency is rising again. Experts are predicting twenty-five thousand dollars for bitcoin by the end of 2018, but how do we know it’s not going to plummet once more? Sputnik spoke with Dr. PJ Radcliffe of School of Electrical and Computer engineering at RMIT about the rise.

Sputnik: What do you think is causing the latest rise in Bitcoin's price?

PJ Radcliffe: It's always very tricky to tell exactly what caused these rises. Some people have speculated that investors have suddenly thought, 'ooh it's really underpriced at six and a half thousand dollars as it was, it's worth more', and they've boosted the price up. The other one you've got to consider is market manipulation. Bitcoin always fashions itself as being outside government regulation. It's one of the attractions to it, but what people tend to forget is that the government helps make sure there's no nefarious activity. So, if a share price suddenly drops for no good reason, a government body will say to the company, 'hey what's happening here', and perhaps expand the share trade. All of this is intended to stop fraud and market manipulation. There's none of that with Bitcoin. It might be that somebody is buying quite a lot of Bitcoin to try and drive the price up, we really don't know. It could be that investors think it's undervalued, but it could also be market manipulation causing it to go up and down.

Sputnik: Could we see Bitcoin start to move toward being used as a currency, rather than an asset?

PJ Radcliffe: I'm still quite worried in terms of the lack of regulation and the ability for market manipulation and fraud. Until Bitcoin can eliminate that, then really you want to be very wary. We see it even in some international pricing of goods and services, that a big player will sometimes manipulate the market to their own benefit. Bitcoin is wide open to things like that. Now, why should I trust my money to Bitcoin, when there are lots of other financial tools like credit cards and bank transfer which are relatively risk free and quite cheap? So, unless Bitcoin can get some traction, offer something which the other financial tools can't offer, then I can't see it having much of an advantage.

Sputnik: Can we expect the rise to continue? Will we ever get another ‘record high'?

PJ Radcliffe: I wonder if Christmas killed Bitcoin. You'll notice the drop was pretty much in the days just coming up to Christmas, when people were busy with other things. That may have caused it. But overall, Bitcoin has had now 2 price spikes. Several years ago it spiked and then dropped back quite a way. It appears now that it has spiked up to twenty thousand and it's dropping down. But there's always the 'dead cat bounce', in all kinds of speculative activities. When things start to fall there's a point when people start to think that everything is going to be OK again, and the price goes back up. So we see a series of bounces going up and down, but the trend it going down.