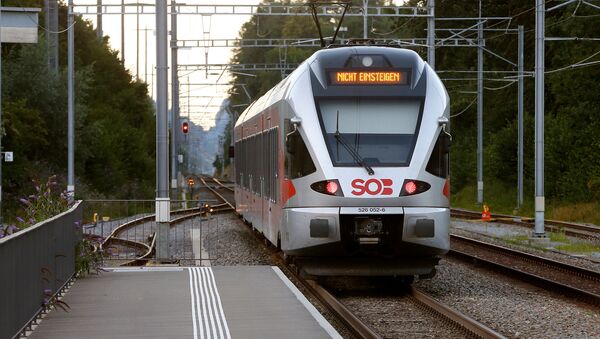 © REUTERS / Arnd Wiegmann
Subscribe
International
India
Africa
Rebels from the Kurdistan Workers’ Party (PKK) have fought a bloody civil war against Turkey in the country’s predominantly Kurdish southeast for over three decades, with their hardline tactics leading to the group being designated a terror organization by Turkey, the EU and the US.

The “Free Kurdistan” ad campaign seeks to raise awareness about the human rights abuses which are allegedly being committed by Turkish troops in Afrin.

Celil Yılmaz, secretary-general of the Council of Youth Multicultural (COJEP) NGO said the “terrorist group” are attempting to smear Turkey via this advertising campaign.

"This morning, Geneva, known as the center of human rights in the world, woke up to the propaganda ads of YPG and PKK supporters. We thoroughly condemn these advertisements. This cannot be explained in the name of freedom of expression,” the NGOs secretary-general told Turkey’s Anadolu news agency.

Swiss authorities have refused to suspend the advertising campaign as “the Swiss constitution guarantees the freedom of expression” and they don’t want to be seen as engaging in censorship.

"The Swiss constitution guarantees the freedom of expression. It lies within the discretion of the authority of the canton to authorize the posting of banners in the public domain, in conformity with Swiss law and public order. The decision to put up or take down posters does not rest within the competency of the Federal Department of Foreign Affairs," Noemie Charton, spokeswoman for the Swiss Federal Department of Foreign Affairs (FDFA), told the Anadolu news agency on April 11.

Turkey’s President Recep Tayyip Erdogan ordered the Turkish Army to launch a cross-border military operation against militants from the Kurdish-led Syrian Democratic Forces (SDF) – which his government considers to be an affiliate of the outlawed Kurdistan Workers’ Party (PKK) – in northwestern Syria earlier this year.

Bomb Explosion Kills 3 Turkish Soldiers in Syria’s Afrin - Reports
The opposing sides have hurled allegations at one another, with Turkey accusing the SDF of maintaining child soldiers in its ranks and deliberately setting up positions near populated areas in a bid to use civilians as human shields.

Meanwhile, Turkey’s incursion in Syria has been described by the Syrian government as a violation of the country’s sovereignty, while others have criticized the reported presence of former *Daesh members in the ranks of militant groups taking part in operation Olive Branch alongside Turkish soldiers.