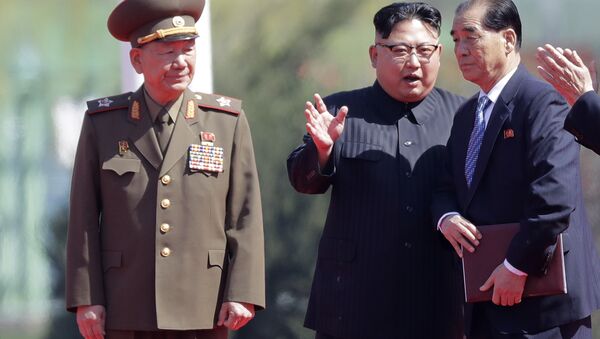 North Korean Foreign Minister Ri Yong Ho arrived in Moscow on Monday morning to kick off his official visit to Russia. This is his next stop after first traveling to Turkmenistan and Azerbaijan, where he attended a conference of the Non-Aligned Movement member states. Ri also met with Chinese Foreign Minister Wang Yi when he transited through Beijing on this trip.

The top North Korean diplomat’s foreign tour follows a breakthrough visit to China by Kim in late March. Kim’s trip to Beijing was his first overseas visit to a foreign country since taking over as North Korea’s leader in 2011.

Responding to the rapid progress of North Korea’s nuclear arms programs last year, the international community joined in the efforts of stepping up economic sanctions against Pyongyang to rein in its nuclear ambitions. The United Nations Security Council (UNSC) voted unanimously in support of a number of tough sanctions against North Korea, while many nations, including Jordan, Portugal, and the United Arab Emirates, cut diplomatic ties with Pyongyang under calls from the United States.

As Kim apparently had a change of heart at the beginning of this year, when he expressed his willingness to hold talks with Seoul, North Korea launched a diplomatic "charm offensive" starting with the nation’s participation in the Winter Olympics, which were held in South Korea in February. Kim subsequently agreed to hold face-to-face peace talks with both South Korean President Moon Jae-in and Trump in April and May, respectively.

Ahead of the summits with South Korea and the United States, North Korea tried to break its diplomatic isolation with official visits to China, Russia and a number of countries in central Asia, political analysts told Sputnik.

"They are trying very hard to launch a diplomatic ‘charm offensive,' not only to South Koreans but also to neighboring countries like China, Russia or even dialogues with Americans through the ‘New York Channel.’ Kim Jong Un made this strategic decision to open up diplomatic relations, not only targeting neighboring countries, but also reaching out to countries in Africa, Southeast Asia, and Latin America. This is a testament to the fact that North Korea has been diplomatically isolated. It became a big burden on the Kim Jong Un regime. They’re trying very hard to get out of this diplomatic isolation," Kim Jae-Chun, an international relations professor at Sogang University in Seoul and a former South Korean government adviser, told Sputnik.

The South Korean scholar believed North Korea’s efforts had paid off and the nation’s image in the international community had improved.

"Kim Jong Un has been handling this situation very well. He looks as if he’s a very skillful diplomat. His wife Ri Sol-Ju, who is a charming lady, has been calling him ‘husband’ instead of ‘supreme leader.’ North Korean media has also been addressing her as the first lady. They’re trying very hard to leave this impression that North Korea is not a monster. It’s a normal country like any other. It is working. I think the perception of Kim Jong Un has changed a little bit here… I think this has helped improve the international image of North Korea and its diplomatic efforts have been paying off," the professor stated.

Little Impact on US Peace Talks

While North Korea’s diplomatic efforts may have helped South Koreans improve their perception of their neighbor, this campaign is unlikely to do much for peace talks with the United States, the South Korean professor argued.

"Some left-leaning population of South Korea is not saying that it’s imperative for South Korea to talk with the North Korean regime because Pyongyang is not that irrational as we once thought. During the inter-Korea summit, the two leaders can talk about how they can increase inter-cultural exchanges. But it’ll have a limited impact on Americans. I don’t think Americans’ perception of North Korea has improved that much," he said.

N Korea Wants to Resume Six-Party Talks on Nuclear Program - Reports
Other experts argued that North Korea’s warming relations with China and South Korea could have an adverse effect on future peace talks with the United States, as Trump may start to have less interest in the meeting.

"North Korea’s diplomatic exchanges with European countries will have little impact. The key meetings with strong impact are still Pyongyang’s engagement with China and South Korea. If such talks are successful, it could even have an adverse impact, as Trump may become upset. I suspect that Trump’s interest in talking to North Korea is less than what it was in the beginning, following Kim Jong Un’s visit to Beijing and [John] Bolton [an official famous for his hawkish views] becoming the US national security adviser," Shi Yinhong, a professor of international relations at the Renmin University in Beijing, told Sputnik.

Through the recent diplomatic offensive, including repairing strained relations with China, North Korea is unlikely to have shared its true intentions with any of the countries it has reached out to, Shi suggested.

"Everybody wants to meet with North Korea because they want to know what North Korea really wants from its ‘risky gamble’ on foreign policy. But it’s impossible for North Korea to show all the cards it has because there is not absolute trust in international politics. What they can do is that they could show one-two cards out of the five cards they have in their hands. This could help improve North Korea’s position in foreign relations," he said.

Beijing Approves N Korea’s Demands for Security in Exchange for Denuclearization
Despite Kim's recent visit to Beijing, it is unlikely for North Korea to rebuild mutual trust and friendship with China all at once, Shi stressed.

"Both China and North Korea needed to improve bilateral relations significantly at this moment. But a lot of problems still exist, as economic sanctions from China continued and it’s hard for Beijing to trust Pyongyang again after all the troubles it caused last year. If you read the official statements following Kim’s visit, both sides were just at the beginning of improving bilateral relations. They just agreed to improve communications on both sides," he said.

The Chinese scholar added that it was difficult for other countries, including China and Russia, to improve relations with North Korea, notably, due to restrictions from existing UNSC resolutions on economic sanctions against Pyongyang.

000000
Popular comments
No mention of any US "charm offensive" by proposing to withdraw military might from South Korea and Japan. Unilateral US military withdrawal should be the basis for all, or any, negotiation.
Ambricourt
9 April 2018, 21:05 GMT
000000
force, not charm is what the usg understands.
michael
10 April 2018, 02:36 GMT
000000
Newsfeed
0
New firstOld first
loader
LIVE
Заголовок открываемого материала
Access to the chat has been blocked for violating the rules . You will be able to participate again through:∞. If you do not agree with the blocking, please use the feedback form
The discussion is closed. You can participate in the discussion within 24 hours after the publication of the article.
To participate in the discussion
log in or register
loader
Chats
Заголовок открываемого материала
Worldwide
InternationalEnglishEnglishMundoEspañolSpanish
Europe
DeutschlandDeutschGermanFranceFrançaisFrenchΕλλάδαΕλληνικάGreekItaliaItalianoItalianČeská republikaČeštinaCzechPolskaPolskiPolishСрбиjаСрпскиSerbianLatvijaLatviešuLatvianLietuvaLietuviųLithuanianMoldovaMoldoveneascăMoldavianБеларусьБеларускiBelarusian
Transcaucasia
ԱրմենիաՀայերենArmenianАҧсныАҧсышәалаAbkhazХуссар ИрыстонИронауОssetianსაქართველოქართულიGeorgianAzərbaycanАzərbaycancaAzerbaijani
Middle East
Sputnik عربيArabicArabicTürkiyeTürkçeTurkishSputnik ایرانPersianPersianSputnik افغانستانDariDari
Central Asia
ҚазақстанҚазақ тіліKazakhКыргызстанКыргызчаKyrgyzOʻzbekistonЎзбекчаUzbekТоҷикистонТоҷикӣTajik
East & Southeast Asia
Việt NamTiếng ViệtVietnamese日本日本語Japanese俄罗斯卫星通讯社中文（简体）Chinese (simplified)俄罗斯卫星通讯社中文（繁体）Chinese (traditional)
South America
BrasilPortuguêsPortuguese
NewsfeedBreaking
06:42 GMTFormer Islamist Preacher: 'There is a Salafist in Every Swedish Mosque'
06:33 GMTAlgeria Closes Airspace to All Planes From Morocco Over 'Provocations'
06:28 GMTRussia Ready to Cooperate With New German Gov't Based on Mutual Respect, Ambassador Says
05:29 GMTUS Sanctions Suffocating Syrian People, International Community Must Act, Foreign Minister Says
05:09 GMTLebanese Public Hopes New Gov't Will Tackle Economic Crisis, But What are the Odds It'll Succeed?
04:32 GMTIndian Scientists' Experiment May Solve Treatment Puzzles of Neurological Disorders Like Alzheimer's
04:31 GMTModi Arrives for Visit in Washington, Welcomed by Diaspora, Foreign Ministry Says
04:30 GMTDon't Do That! Shiba Inu Worried Its Cat Buddy May Get Hurt
04:15 GMTLive Updates: India Records 31,923 COVID-19 Cases Over Past 24 Hours
04:09 GMTPhoto: Armored Vehicles, National Guard Appear on Texas Border Amid Abbott's 'Steel Wall' Deployment
03:58 GMTBannon Admits He Spoke With Trump About 'Killing' Biden Presidency Ahead of Deadly Capitol Riot
03:00 GMTWreckage of Disappeared An-26 Plane Found in Russia's Khabarovsk Territory - Source
02:20 GMTLavrov Holds 1st Meeting With Truss in New York Amid New UK Accusations in Skripal Case
01:49 GMTDHS Looks to Staff Gitmo Migrant Facility With Guards Who Speak Haitian Creole Amid US Border Surge
01:30 GMTRussian Crew Leaves Boat Pilgrim in Alaska, Will Renew World Trip Next Spring - Captain
01:00 GMTWall Street Up Broadly as Fed Signals Caution With US Stimulus Taper, Rate Hike
00:45 GMT‘This Moment Demands Action’: Biden Eyes Executive Actions After Fruitless Police Reform Talks
00:26 GMTMoroccan Liberal Parties Form Coalition Government, Ousting Islamists After Decade of Rule
00:00 GMTIAEA Must Have Access to Nuclear Fuel for Australian Submarines - Iranian Envoy
YesterdayFDA Authorizes Pfizer Booster Shots for Elderly, At-Risk Americans