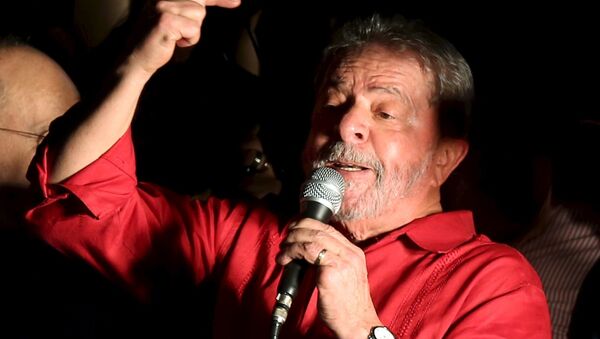 Former Brazilian President Luiz Inacio Lula da Silva has assured thousands of his supporters that he would turn himself into police, but also declared his innocence and argued his corruption condemnation saying it was simply a way for enemies to make sure he doesn't run, and possibly win, the Brazilian re-election in October.

​"Their dream is that I will not be a (presidential) candidate. The other one is my imprisonment. I imagine Veja's (Brazilian paper) exertion. They'll have multiple orgasms," Lula has posted on his Twitter page.

An appeals court upheld the ruling in January and has increased Lula's jail term to 12 years and a month. This week, the Supreme Court voted six to five to order him jailed, months ahead of the presidential election, set for October.

WATCH Thousands Take to Streets as Brazil Court Votes to Jail Lula da Silva
On Thursday, federal judge Sergio Moro issued an arrest warrant for Lula as well as an ultimatum stating that he must turn himself into the police by 05:00 p.m. local time (20:00 GMT) on Friday to begin serving his 12-year prison sentence.

Lula failed to surrender voluntarily to the police before the deadline and spent Friday night at a metalworkers’ union building, which, according to media reports, was surrounded by thousands of his supporters, the Globo broadcaster reported.

Meanwhile, the Brazilian police stated that Lula's arrest was impossible under such security conditions and postponed it.

Lula, who served as the country’s president from 2003 through 2010, was sentenced to 9.5 years in prison last summer for allegedly accepting a luxury apartment from a construction firm in return for political favors. Lula denied the accusation.

While Lula is one of the most popular presidential hopefuls according to opinion polls, he is unable to run for president in the upcoming election.