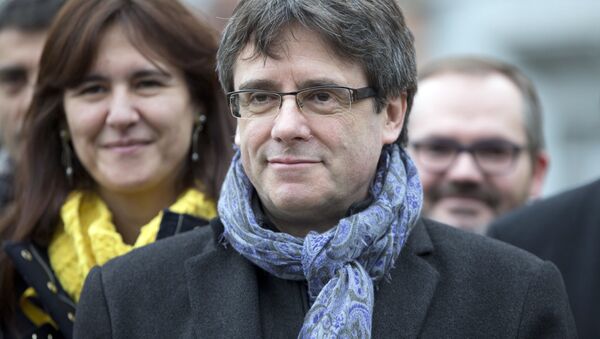 Puigdemont has left the German prison on bail. According to La Vanguardia newspaper, Puigdemont paid his bail shortly before midday local time [10:00 GMT].

On Thursday, High Regional Court of Schleswig-Holstein ruled to free Puigdemont if he paid a bail of 75,000 euros ($91,700).

Carles Puigdemont, on Friday called on the Spanish authorities to free jailed Catalan politicians after his own release on bail from a prison in Germany.

"I [call] for the immediate release of all of my colleagues still in the Spanish prisons. It’s a shame for Europe to have political prisoners," Puigdemont said after his release, which was aired by RT Ruptly broadcaster.

Madrid has requested to extradite the former Catalan leader, however, the German state court said that corruption charges could lead to his extradition. The German judge has rejected the Spanish accusations of rebellion, as in Germany the treason charge implies the use of violence. The court added that it also finds no reason to believe that ex-Catalan leader risks persecution in Spain.

Berlin Reportedly Has No Plans to Impede Puigdemont's Extradition to Spain
Carles Puigdemont was detained in Germany on a European arrest warrant issued by Spain on March 25, when he crossed the border with Denmark on his way from Finland to Belgium, where he currently resides. The ex-president is facing up to 30 years in prison for rebellion and misappropriation of state funds.